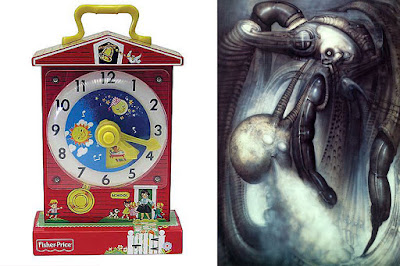 a) 12th August 2016
Having another intuitive moment of realisation about a Fisher-Price toy that H R Giger would have referenced in his artwork, and so this may have crept into 1975-1976 paintings Mordor IV to VII and XII contributing to a sense of horology.

Large floating faces are to be found in some of the other Mordor paintings that brings one to make the Fisher Price clock connection, and quite a while ago, I had decided that a sense of horology seemed present through the paintings. References to the ring of the clock face with the numbers and the handle of the clock have become too generalised to bother to point out. I am asking as well if the top right screw has become the eye of the pale face in the top right

b) Dove wing and head transformed into flipper
Following this idea, a suggestion of a wing at the left of that is what remains of the dove on the clock transforms into a flipper of the Nommo. 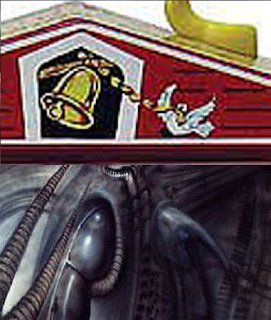 c) Bell transformed into phallic sausage
The bell image at the top of the clock becomes the phallic tip of the central black sausage coming out of an opening (which might also be considered a clock hand again), and to the right is a suggestion of a wing. 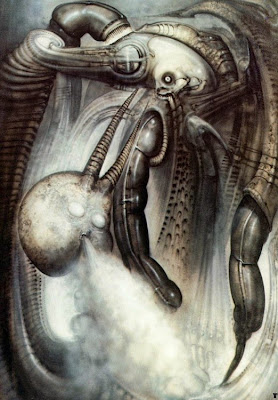 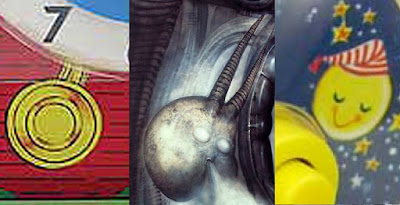 e) Clock hand transforms into squid
The clock hand with the pack of card spade shaped tips become moved to the top and transformed into the tentacles of a squid. 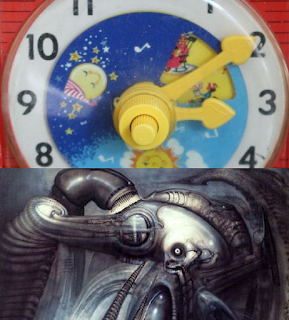