a) Giger's design appears to be inspired by the general structure of Ernst Fuchs painting "Observatorium" from 1965 which he would have first seen in the book  Ernst Fuchs : Architectura Caelestis which was a book that changed Giger's direction in art considerably. 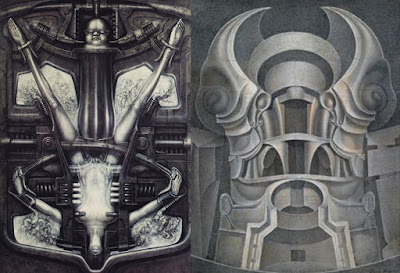 b) Giger has imprisoned the female body within the structure and the telescope shaft becomes a barrel for extracting the foetus. Giger has turned the upper side parts of the building have been turned into the woman's legs. The lower oval area becomes the place where her central torso is place and the small lower square the place where her head is placed. The central section above the oval shaped chamber, can be seen shapes on either side that have been turned into pale coloured areas where gases or fluids are being pumped into. Tin can opening key like structures on the sides of the lower part of the building have been turned into the handles onto which the woman grips. The inner curve of the upper oval area becomes a structure that separates the woman's legs

c) See Similarities between "The Spell III" and "Stillbirth Machine