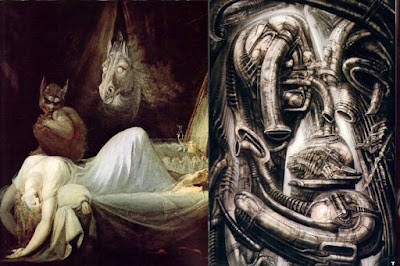 Henry Fuseli was a Swiss-born artist who lived from 1741–1825. He was famous for his paintings and drawings of nude figures caught in strained and violent poses suggestive of intense emotion. He also had a penchant for inventing macabre fantasies, such as that in The Nightmare (1781).


b) Looking for an Oscar Wilde connection
Oscar Wilde in wrote in his biographical essay "Pen, Pencil and Poison," about an art critic who was also a murderer, "With the imitative and realistic tendencies of his day he had no sympathy and he tells us frankly that his great admiration for Fuseli was largely due to the fact that the little Swiss did not consider it necessary that an artist should paint only what he sees. The qualities that he sought for in a picture were composition, beauty and dignity of line, richness of colour, and imaginative power. Upon the other hand, he was not a doctrinaire." It can be speculated that fictional identity of the narrator in the essay represented the personality of Wilde

g) Comparison between the shaft of light with roughly triangular form in comparison to the
triangular parting in the curtains.
The woman's knee from the Fuseli painting perhaps transformed into the biomechanised roast turkey which perhaps also has incorporated into it the side features of a horse's head 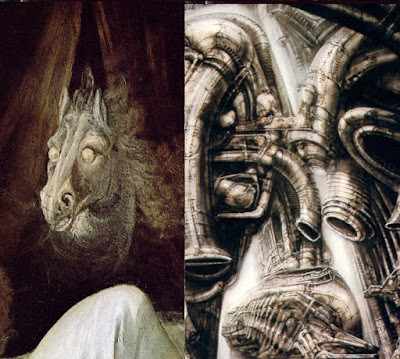 h) In Giger's painting , where the Fuseli horse's head should be, there are roughly pommel shaped objects that might be said to be in the position of the horse's eyes 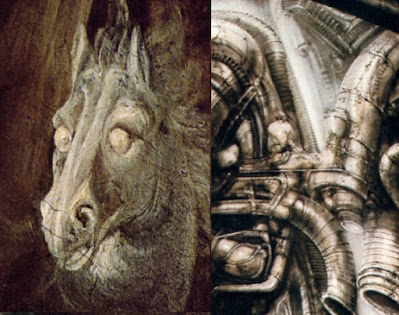 i) The eyes and their equivalent

k) The fabric draped down the end of the bed forming almost a semi rectangular shape at the bottom
with a shadow inside, and Giger has taken that and turned it into a rectangular opening in the side
of the phallic form