a) Tomb Discovery
In 1922 came the discovery by Howard Carter and Lord Carnarvon of Tutankhamun's
tomb. Items discovered inside such as his sarcophagus, mask and jewelry caught the imagination of many creative people over the decades to follow. 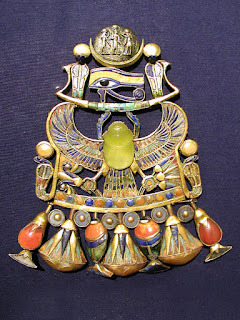 b) Mickey Mouse
Perhaps the desert glass pectoral caught Walt Disney's imagination when he was looking for a cartoon character and thus came up with Mickey Mouse in his earliest appearance in the 1928 cartoon  Steamboat Willey and the design would continue to evolve, seemingly as if the pectoral was kept in mind

e) HR Giger's Passage Temple Entrance
1975, Giger painting this composition that appears to have merged elements from the  Fisher Price cot activity center and the Desert Glass Pectoral as well. 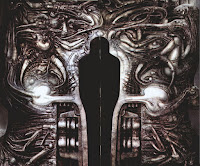 e) Interest sparked by Exhibition
1976 was the year that the The Treasures of Tutankhamun exhibition started off in America at the National Gallery of Art and this would have lead to magazine articles across the world since it was all about what was happening in America and an exhibition catalogue that year.

f) Star Wars
That year Tutenkhamun's scarab pectoral with desert glass scarab become incorporated into Giger's Necronom II that would later lead to the design of the face of the monster in Alien (1979) and also the Millennium Falcon from Star Wars (1977), the movie which set Ridley off in the direction of making a science fiction film.

In the Millennium Falcon design, the spheres at the side have all been placed at the top and the six discs at the bottom have been placed in two rows on the Falcon.

The wings have been abstracted making on of them partially the shape of the cockpit and the corridor leading up to it. Meanwhile the spaceship's design has been incorporated features from a pair of falcon earrings from Tutenkhamun's jewelry collection. 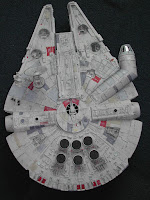 g) Giger's Necronom II
In Giger's Necronom II, the pectoral becomes highly abstracted and merged with other forms that fall into a similar pattern, perhaps with the phallic tips of the creatures tongues having once been the suns on top of the lower cobra's heads on the pectoral, the sphere's linking the jaw muscles between the three faces are the transformed suns on top of the upper cobras. The feathered tail of the scarab transforming into the entity's teeth.