Eraserhead: Lady In The Radiator 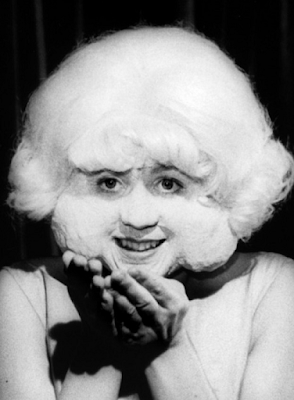 a) Idea coinciding with Taking up meditation
The lady in the radiator was not in the original script.

David Lynch had been meditating for about a year and maybe it was a little less than a year after they started shooting the film but it might well have been when he had the idea for the Lady In The Radiator.

So an assumption might be that the character came through as an idea as a result of his practice of meditation.

However the story about this character is that it started to come through, perhaps six months into the shoot which was half way through it and they were taking a break from it.

One day David was sitting in the food room , he drew this small lady and what were what appeared to be little fetuses falling out of her.

The idea would develop more and more.

He then wrote the lyrics for the song "In Heaven", and he thought that she would live in he radiator where it's nice and warm, and this would be a real comfort for Henry.

b) Small box like compartment in radiator that awaited a tenant

Then David thought "gee!" and he went running into this set which was across the hall.

They had already shot scenes of the radiator with Henry looking at the radiator two different times and in the radiator there was a weird small box like compartment that most radiators didn't have, so it was if she was already going to be there but they just didn't know it.

c) The value of the addition
For David Lynch, the lady in the radiator represented the goodness in Henry's life, a sort of a beacon of light and hope, the real light in this dark world and the film was totally dark without her.

Perhaps for some she might represent a sort of a goddess character, but the lady in the radiator is a very strange looking woman for sure, has a skin problems that she's trying to cover up with pancake makeup and it's a bad problem.

Without it the story would have been very dark, and so she represented a beacon of hope for Henry.