a) Giger appears in his paintings to show an interest in the ancient Dogon legends of the Nommo from Sirius who revealed information about Sirius B which hadn't been discovered by Western astronomers until 1862. However the idea of a dog star and its unearthly inhabitants was catching the attention of the public in the form of the stories of the adventures of Baron Munchausen based on the stories of Hieronymous Karl Friedrich Freiherr Von Munchhausen, and so an illustration of "Inhabitant from the dog-star" published in"The travels and surprising adventures of Baron Munchausen" by Rudolph Eric Raspe (1785) by Cruickshank showed up with a very curious face. Then with Sirius B, it looked as if Giger thought about Hieronymous Bosch, perhaps he thought about Munchhausen's first name being Hieronymous. So he thought about what he could do with its strange face and merge it with.
He also finds out about the Nigerian synth-funk pioneer William Onyeabor album Atomic Bomb perhaps I might wonder if the information came from Bolaji Badejo who came from Nigeria, I imagine that he associated the oddity of the surname Onyeabor with name Hieronymus Bosch since they share the letters ONY and BO in the same order, leading him to merge the cover photo with a demon from Hieronymus Bosch's Garden of Earthly Delights.
The composition of the picture also reflects a picture by Gilles Rimbault for Fiction No 190, Octobre 1969, as if Giger looked at that and decided that he had to do something similar but different. Perhaps the "Bau" in the name pronounced as Bo becomes part of the word connection. Perhaps the face of a Japanese Oni transformed into a Heike crab and there's The Big Top to consider with Bocklin's "Die Toteninsel 3"

f) Connections with Arnold Böcklin's Island of the Dead 3.
Since he was a fan of the artist, I might also wonder if Gigr was thinking about one of the Arnold Böcklin Island of the Dead paintings, such as the right side of no.3 which would have a doorway where the nose of the demon was, connecting that with where the doorway in Erebor in the Tolkien book cover for The Hobbit would be found. This perhaps would mean that he was making a BO connection between Böcklin, Bosch and Onyeabor and the Big Top was near enough to the German for Island of the Dead being "Die Toteninsel" with Top and Tot.

g)  Oni and Japanese Heikegani crab
Another thing to point out is the word Oni in Japanese is a sort of a demon and the Japanese produce Oni masks, but I haven't seen one on the internet with anything in common with this face, but I wonder if Giger was thinking of one of those. And then thinking along the idea of something Japanese, I suppose the general structure of the thing resembles a Japanese Heikegani crab which has a face like form on the shell. Here's an image of one of the crabs, which is something we've come across before in Giger's painting, The Spell III.

h) Spaceship from Valerian - Ambassador of the Shadows

Meanwhile, on April 4th 2017, while I've been doing everything I can to find everything significant about Giger's Demon, and this space ship from the Valerian comic book comes up which I find connects with something else.

I had noticed a few days earlier that Moebius' derelict exterior appeared to reference this drawing of a spacecraft and I wondered if this illustration was being handed around as something to look at.

I can't help noticing how there are similarities between the two structures, as if the side pods with their pointed tops, of the spaceship, with the pink cut jewel like windows have turned into the demon's ears with ear phones.

Then from the upper crystal windows, something of it transforms into the phallic horns.


That alien spaceship could be turned into a strange hideous face with pink eye goggles.

Perhaps one could think about how its supports at the bottom stretching out to the feet have in Giger's painting been reversed.

So that's another curiosity.

Does it connect by word association in some way. i am not sure.

I suddenly decide that Giger's Demon face also bears vague similarities to features of the Ghost Shark perhaps as if the features have been jumbled up.

Perhaps it explains the strange lower nostrils, the row of holes beneath the nostrils, the teeth and a general abstract sense about the facial features.

However I can not really see the word associations here either, although the German word for Shark is Hai and I had decided that Giger made use of a Heikegani crab. 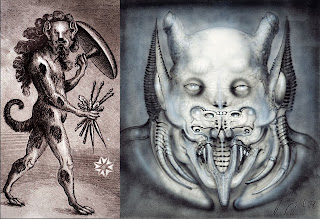 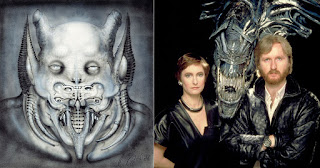