Leading from
The Tomita Planets
and
H R Giger's Art 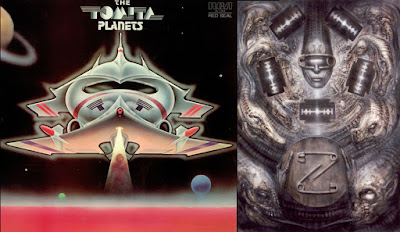 a) On the 8th of May 2016, news came reached the world that Isao Tomita had died aged 84 from heart failure. His album The Tomita Planets caught Ridley Scott and Dan O'Bannon's interest as a soundtrack ideal for Alien.

b) Stanislaw Fernandes provided the art for the album cover. He created a piece which had a symmetrical view of a curious spacecraft against a background of stars an planets. Perhaps it seemed vaguely reminiscent of a Giger painting because of its symmetricality.

d) I took a look at Illumunatus II painted in 1978,  which would have been a second painting done inspired by the Illuminatus Trilogy, but I decided that perhaps this had been painted after Giger might have been introduced to the album himself during the Alien production. The lower planets and the missiles have been transformed into eyes of the strange animal like heads on serpentine bodies. Distant star on the lower left turns into a pinpoint of light on the bottom left's head's ear. The space ships window turned into the safety pin visors. The ship's upper striped wing markings along with the shape of the upper wings and striped markings on the nose have been turned into razor blades and into the circle of ribbing around the face etc. Saturn's ring unleashed the idea of the space serpents. The ships undercarriage covers become transformed into the upper safety pin of the letter Z. The point where the cone of light beams down from the ship becomes the centre of the lower razor blade

e) Illuminatus I
The horns at the top of the space ship in The Tomita Planet's painting may have inspired the ear like horns in the Illuminatus I painting. I might also be asking if the human face with the safety pin glasses is loosely inspired by photos of Tomita wearing his glasses shown in some of the albums. But generally Illuminatus I doesn't seem to be as inspired by Tomita's Planets as Illuminatus II, and instead borrows more heavily from the covers from the Illuminatus novels along with general enthusiasm for some other things at the time, (see HR Giger's Illuminatus (1978))