Friday 1st December, 1978.
Filming inserts.
Int. Mess for scene no 174pt,
Int. Computer room for scene no, 13, 174pts.
Int. Infirmary for scene no, 97a.
Other actors would be used to fill in for Ripley Dallas and Ash. Props would include Ash's probe and special effects would include the facehugger. Art department would supply the moviola and the relevant film for matching. Catering would be trolleys  on stage for 30 people.. 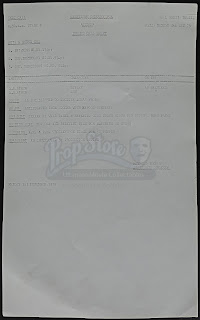 Interior of bridge scene 16pt & 46pt, interior of engine room scene number 17Apt and interior of Narcissus scene 96pt and 175pt, and these shots would requiring 16mm plates for models)

Liz Mitchel, Andrew Scott, Alan Gibbs and Bob Hooker doubled as Ripley, Parker, Brett and Kane, respectively, they had to be in the studio by 9.30am
A moviola was used for matching on stage, and catering for 30 people was provided
Filming of inserts.
Bridge scene for the Nostromo,
Engine room scene and the Narcissus scene


Wednesday 6th December, 1978
Filming in the Maintenance Claw Room for scene number 132pt.  Bolaji Badejo is brought in for 9.00pm to play the alin. A rig for the Alien by the special effects team would be required. Catering trolley for 30 people is required along with a Moviola and relevant film for matching on stage.


Thursday 7th December 1978
Filming of the interior of the maintenance pump room, sc. no, 186 Apt

Bolaji Badejo is brought in to play the alien, getting to the set 10.30am. A rig for the Alien by the special effects team would be required. Catering trolley for 30 people is required along with a Moviola and relevant film for matching on stage.


Friday 8th December, 1978
Filming of the interior of the maintenance pump room,

Scene number 186Apt to be completed.

This would have been the scene where the alien attacks Lambert and Parker and kills Parker. The Alien would be shot, but on the previous day, they didn't have a name for the performer. Set pieces had not been discussed before hand, but a rig for the alien would be employed. (Was this the shot where a rig with the alien tongue is used to make a hole in a prosthetic head for Parker?

Thursday , 28th December 1978
Another revised final draft is completed, as documented in Alien: The Illustrated Screenplay by Paul M Sammon
Posted by wmmvrrvrrmm