Alien: The Chestburster scene: The splattering 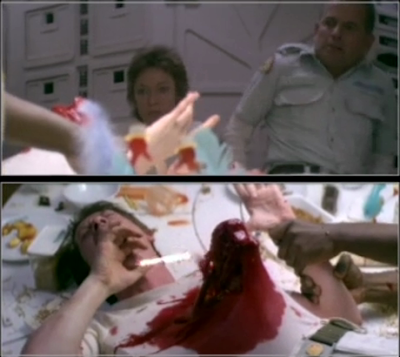 a) Mount Vesuvius explodes
Paul Ibbetson or Ibbo for short, called for a reset.

Ridley knew he had the breakthrough moment okay; the baby alien was nicely soaked in blood and so looked correct for the first moment as the T-shirt rose and the head appeared and could work if cut quickly.

They closed up the T-shirt so only a tiny hole was left, but it meant that the baby alien head would burst through now.

Ridley quietly asked Nicky to add another blood line pointing at the crew at the back, and Nick told him this time he’d make sure the pressure was fully ramped up.

Ridley's idea was to add a second blood line and focus it on the actors and Veronica Cartwright, and it would pay off better than expected.

He was aiming for a hardcore reaction of raw animal fear rather than just actors acting terrified.

There were five cameras and only a chance for one shot. Ridley had one camera above and so before hand he said to the others "Make sure that no pipe hits the camera, that's the key. Because I can always shoot reactions again, but the blood, I'm not going to do that again"

The cameras rolled when Nick had the setup ready and the dressing was placed to match.

And so the next take, Dallas and Parker are grabbing Kane by the arms to steady him as he lets out a scream.

Dallas defeatedly ask " Just what do we do?"

Ash screeches "Try and control it!"

There was an airline firing off blood from inside the false chest, getting caught in the T-shirt, it splattered John Hurt's face with blood, and when the chest burster was pulled back into the chest, the jet of blood was unimpeded.

Veronica was so interested in what was going on that she leaned too close and suddenly got hit on the face with the blood from the arcing jet, Veronica was informed before hand that she'd get a little blood on her face, but they caught her completely off guard. She just opened her mouth when the blood hit her square in the face.

Ian Holm backs away, stepping over the back of the banquette, probably terrified about getting covered in blood, taking cover behind Veronica, but she freaks out waving her hands around screaming to high heavens.

Ian Holm cries out "My god!"

Ridley screams out out "And again Nick! and Again!"

Dallas aimlessly asks "Just what do we do?"

As the blood splatters profusely about the set, Sigourney Weaver as Ripley screams and Captain Dallas who should have been the strong sturdy captain throws himself against the wall, both hands covering his mouth, his eyes wide in terror. 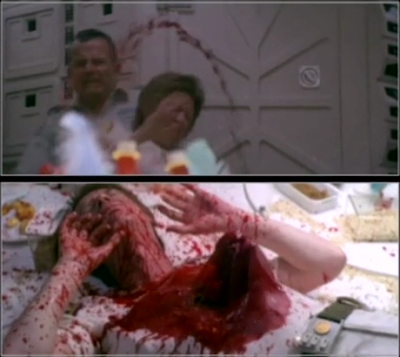 b) Veronica in Trouble
The chestburster came through again. Ian Holm probably feels helpless about helping Veronica and then she recoils in horror, her knees suddenly hit the back of the banquette.

She flipped upside down and her boots were sticking in the air.

A member of the crew calls out " Just check on Veronica that she's alright?"

Afterwards, perhaps Veronica got up by herself or two people pick Veronica up and she was weak-kneed and they had to help her off the set.

She was in hysterics, looking white and shaken and was crying as more blood kept flying around.

John's face is absolutely covered in blood, but kept on acting until Ridley called cut

A jet of blood spurts out. The little alien sticks out of the chest and then goes back in again and out

Ridley cries out " And again Nick! Ram it out! Ram it out!", blood spurts across the room one more time.

Veronica gets to her feet and staggers out of the direction of the jet.

Someone is calling to Veronica "Veronica, that's right you did it"

This was a real reaction from Veronica, a true moment of method acting, as she was beyond playing the character – she was in distress.

Yaphet was mentally blown away, left in shock having been caught off guard by the sudden outburst and explosion of blood.

He noticed how Veronica had been covered in the pig's blood.

John Hatt who was controlling a valve for the blood jets, having witnessed what happened to Veronica, also observed how Harry Dean Stanton was hit , staggered to the back wall and was promptly sick. Surely the actors would have wanted to kill him for the next few minutes since they had no idea how bloody it would be.

With the shot was completed, Ridly softly whispers "cut" and the crew applauds spontaneously.


After Ridley cut the cameras they all stood around in shock, covered in splattered blood.
Two technicians rush over to help Veronica, they lead her slowly off the set like some painful accident victim visibly shaken.

And the actors all went back to their dressing rooms as Nicky set up the next scene in the sequence. 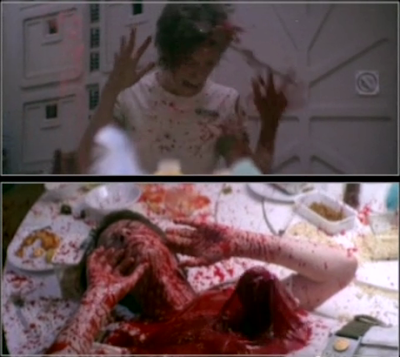 c)  After the event
20 minutes later the actors came back, Veronica Cartwright had showered, they fixed her up, put a duplicate costume on her and she looked the same, but a little spooked.

Dan O'Bannon went up to her at a point in time when either she was off to the dressing room to clean up or after she had come back cleaned up and so he said to her, beaming away "That was fantastic, Ronnie. What you did was incredible. Was that all acting?"

Veronica glared at him somewhat spooked "Thanks Dan," she quavers, perhaps even wiping blood from her mouth, "but I really was sort of freaked out"

The stench permeated the set for days. Veronica would gag whenever she would walk in. It was awful, but it definitely helped them remember what was supposed to be happening.

Yaphet went back to his trailer unable to speak, telling himself that his career would be over once the public saw the movie.

The chest burster scene brought tears to his eyes because he couldn't believe this event was happening.

For a couple of weeks since the shooting of the scene, his wife would witness that he would come home having the creeps and he would sit in the room for a couple of hours before he talked to anyone.

Curiously Ron Shusett could look at this response as being that was the moment when they were so into the movie that they were actually scared by this alien's presence and they knew that this wasn't some rubbish movie, and it was going to scare the hell out of everybody.