a) For The New Gods comic book #5 (October to November 1971), Jack Kirby drew the "Leviathan" beast, a vast horned whale with tusks like an armoured mountain with a battering ram at the front.

c.i) Giger's Necronom III from 1976 perhaps started off with an interest in this Kirby beast incorporating the bulbous head, the mouth and the tusks in a transformed form.

c.ii) Giger made the head bulbous slightly like the head from the early The Fly films and also made it like an elephant as well. Structures that might echo the idea of the battering ram seem to be below the water as a reflection.

c.iii) The ribbing along the whales jaw has been transformed into downward pipes. 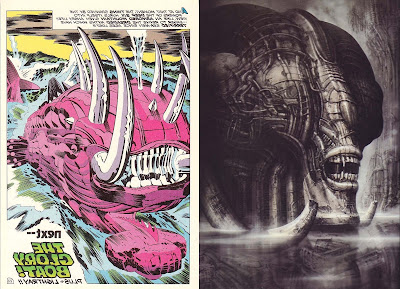