a) Hollywood's disinterest
While there had been some discussions on a sequel for Alien, the studios appeared to not be interested in doing a sequel as back then at the time of the film they didn't see this as being a franchise.
Although in the twenty first century, if they got the vibe that it was going to be successful, it became common practice to have a sequel on the tracks.

b) Inspired by Giger's unused mysterious creations
However Ivor was absolutely fascinated by what HR Giger had been working on that never quite found its way in to the Alien movie.

For instance there was the hieroglyphic tableau that was going to be found in the derelict's entrance corridor which had some sort of Egyptian/ galactic Alien background to it, and that never got into the final movie.
(see also Alien: Placement of the life cycle tableau) 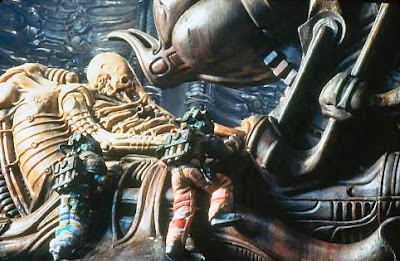 c) Interest in the Space Jockey's story
Ivor wondered at the time of the film about who the space jockey was, what had gone on in the derelict ship with its strange life forms in the silo, whether the spores were armaments and perhaps they were being shipped somewhere,

The derelict ship in the past had a great sense of mystery to it that exited many fans.

(see also: Alien: The end of the line and back to the distant past)

e) Ivor explores the writing of a sequel/prequel
He certainly saw the development of the movie production in a way that fans would only dream of seeing.
However as a genuine sci-fi buff, a writer himself and because of his close involvement in the Alien production, he found himself in the following years writing a thirty or forty page treatment based on the idea of a prequel, to explain the mysteries of Alien.
Although some of the mysteries were later unravelled in in Prometheus, it didn't touch on where his ideas were going and so he found himself bitterly disappointed.
Hollywood wasn't interested, they wanted him to change the script to something else and so he gave up. 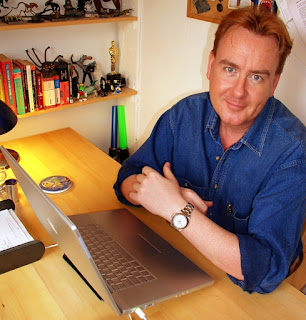 f) Peter Briggs  read the script
Peter Briggs who is known for having written the Alien Vs Predator script in 2021 was able to acknowledge that he read it and was able to share some details
He reported that the story was called "Universal Matter" and dealt dealt with mercenaries that enter a pyramid, and a black protoplasm that could be described as a primeordial goo that was pretty much like the black goo that would turn up in Prometheus
It was more like a short script than just a treatment.

The story didn't effect the Alien franchise and worked as an interesting standalone.
He found that it straddled a lot of gaps for those who like Alien and Aliens, and that those who liked "Aliens" and "Prometheus" ought to be very intrigued by it-
Curiously he noticed that it seemed as if more than one person took material from Ivor's work to the extent that he was amazed that Ridley has said anything about Powell's script in relation to Prometheus because there was some of that in the movie.
Back during the time that Ivor had written the script, he had given it to Jim Cameron to look at and this was before Cameron had come onto Aliens.
Ivor would continue to hope that he could do something with his 'script', and if the Spielberg produced film he co-wrote "Finch" starring Tom Hanks proved a success there might be an opportunity.
(See also Alien vs Predator: Peter Briggs' script)
Source Quotes