leading from
Alien Afterthoughts
and
Alien vs Shivers: (Inspired by Cronenberg's Shivers?)

a) The seed for the thing that seeds Kane
O'Bannon mentioned in his essay "Something Perfectly Disgusting" about how he found inspiration in the Philip Jose Farmer's short story collection Strange Relations, which dealt with stories of the sexual biology of very strange extra-terrestrials. O'Bannon read through this book published in 1960, as a teenager and the inspiration can be found in the life cycle of the creature shown in Alien. Presumably Ron Shusett knew about the story too and they had discussed it together. Perhaps it was the odd sexual concern of the short story "My Sister's Brother" being the last story in the book along with its closing lines, that implanted the seed of the idea for the facehugger's ability to impregnate its victim that would grow into something. 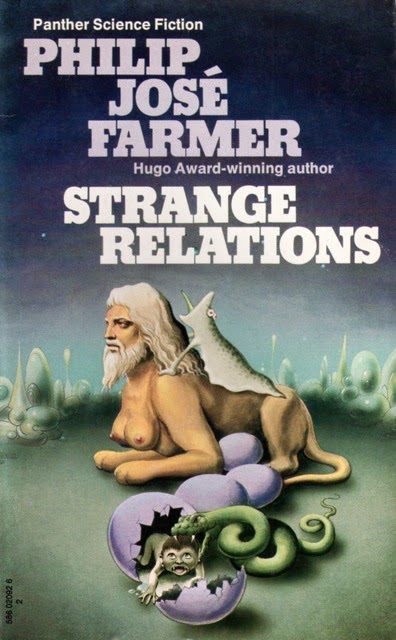 b) Description of 'My Sister's Brother''s sexual concern
Edgard L. Chapman: There is a lovely alien woman, Martia, whom the hero (Lane)  meets on Mars, where both are explorers. Martia differs from human females, however, by lacking conventional genitalia below the waist'

Lane is attracted to Martia, but instead of starting an affair, he subliminates his desires in feelings of brotherhood between human and alien. When Lane learns the way Martia's species reproduces, however, he finds her repulsive and the story moves to an ironic denouement.

Martia carries a "larva" or wormlike embryo in her throat engendered by two others of her race, the Eeltua. The larva is bother a potential child, and a phallus that will fertilize her ova, but only when she is excited by expressions of affection from another adult. So complex a system of reproduction reduces the human conception or parentage and ancestry to absurdity. This biological arrangement is also esthetically disgusting to Lane, who imagines that all humans will share his feelings of nausea.

"My sister's Brother" ends ironically when Lane destroys the larval fetus of his alien companion, and is only prevented from killing Martia herself by the fortuitous arrival of some of her Eeltuan companions. Instead of punishing Lane, the Eeltua treat Lane compassionately, considering him a victim of rigid conditioning. Even Martia, heartbroken by the loss of her fetus hopes that Lane will outgrow his ethnocentrism under enlightened teaching.  (The Magic Labyrinth of Philip José Farmer)

c) Closing Lines Plant Something Inside
And so in the story of My Sister's Brother, it got to a point where 'Lane clenched his teeth together and bit the end of his tongue until it bled while they put his helmet on. He did not dare to try to talk, for that would have meant he would scream and scream. He felt as if something had been planted within him and had broken its shell and was growing to something like a worm. It was eating him and what would happen before it devoured all of him he did not know'(Strange Relations, "My Sister's Brother, p189),
Posted by wmmvrrvrrmm