a) First revelation at the Courtauld Gallery

On the 25th of April, 2015, went to the ﻿﻿Goya's "the Witches and Old Women Album" at the Courtauld gallery in London, and suddenly noticed the drawing  "Subir y bajar" inspired Dali's "soft construction with boiled beans (premonition of civil war)". I thought that perhaps there were some other details in that certain album that inspired this painting of Dali's.

"Plate 56 of the 'Caprichos' prints, 1797-98 from the first edition (trial proof), 1799. Etching and burnished aquatint. Two figures tumble from a great height while another is hoisted up by a huge, laughing satyr, a symbol of lust. The triumphant , grinning figure may be a reference to Manuel Godoy, the Queen's lover, whose meteoric rise to power was followed by an abrupt fall from grace in 1798, when Goya was working on the 'Caprichose etchings." (Information on wall at the ﻿﻿Goya's "the Witches and Old Women Album" at the Courtauld gallery in London)

i) The satyr's lit knee lends itself as a starting point for the buttocks in Dali's painting, before being transformed by elements from other works by Goya as explored below. It holds onto the legs of the woman standing above and inspires the way the hand holds the woman's breast, and perhaps the satyr's head transformeds into the large grotesque hand.  Before the satyr, someone has his legs and rear in the air which becomes a starting point for where Dali places the large hand in the lower left of the painting The tuft of hair held by the woman's hand on the left inspire the splayed out toes on the end of the foot standing on the buttocks

ii) The upper part of the lower leg standing upon the buttocks seems inspired by the form of the Satyr's foot held in the air in "Subir y bajar" as seen further above while in that picture the arm of the inverted person floating into the distance becomes the lower part of that leg, and it also might have inspired the stretched foot standing upon the buttocks, just as the position of the satyr's foot reversed may have inspired the extended oddity of the foot supporting the buttocks beneath.

Another drawing that that I noticed on that day at the Courtauld Gallery from the collection that possibly entered into the painting was  Quéjate al tiempo (Accuse the Time) that I think informed Dali with ideas for the upper body and head of this character. This illustration was started in 1802 and finished a decade later.  However her arm on the left becomes transformed into an elongated breast being held by a hand, perhaps partially inspired by her own hand positioned there merged with the Satyr's hand holding a leg in "Subir y bajar" and the general form of its head,. The form of the dress spread out up to the hand also inspires the form of the arm reaching out to squeeze the breast. The arm on the right becomes transformed into the upper part of a bent leg. Her head is similar enough to be the source of the one in the painting and where the hand is held behind the head becomes the hair hanging from the back of the head in Dali's painting.

i) On the 12th of October 2015, Christian De Boeck shared an album with some Goya etchings on his Facebook page from the Gallica Facebook page and I made another connection. Compare the buttocks from Soft Constructon With Boiled Beans ( Premonition of a Civil War) painting with the plucked harpy in the lower right from Goya's 1799 etching "Todos caerán"("All Will Fall "), another from the Los Caprichos series, no.19.

ii) Notice the position of the humerus part of the wing in Goya's etching and the line of the fracture along the upper right of the buttocks. The position of the fracture also loosely ties in with the place of the shadow on the knee if the satyr in "Subir y bajar" which also ties in with the ideas behind the buttocks formation. 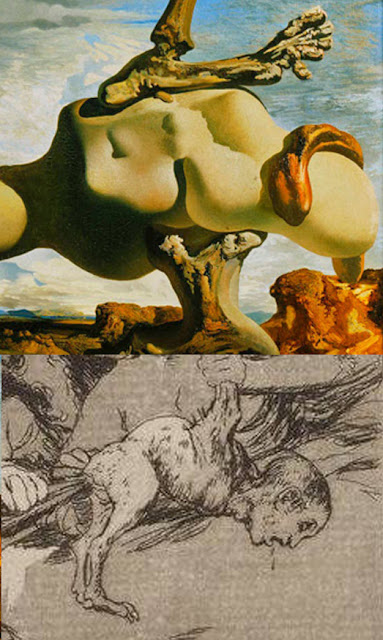 i.) On the 13th of October 2015, I realised that Goya's "Unos á otros" from the Los Caprichos series (No.77) shows people playing toreador, the part of the image showing the boy holding the padded shape representing the bull in a reversed form lends its shape to the harpy transformed into buttocks and so the head of the harpy becomes a featureless boiled bean like lump, the boy's arm, legs and behind become transformed into the foot and ankle supporting the buttocks.

ii.) One might take note of the spears in Goya's image and perhaps think that Dali took some interest, and so the leg standing upon the buttocks in his painting is partially as thin as a stick. and one might also merge this with the tree trunk from "All will fall".  Also it merges with what was discovered about the satyr's raised foot with inverted man in the distance as seen in the picture To Rise and Fall/ "Subir y bajar".

g) See the Caprichos Prints as displayed on Wikipedia