leading from
Creating The Alien
and
Bolaji Badejo 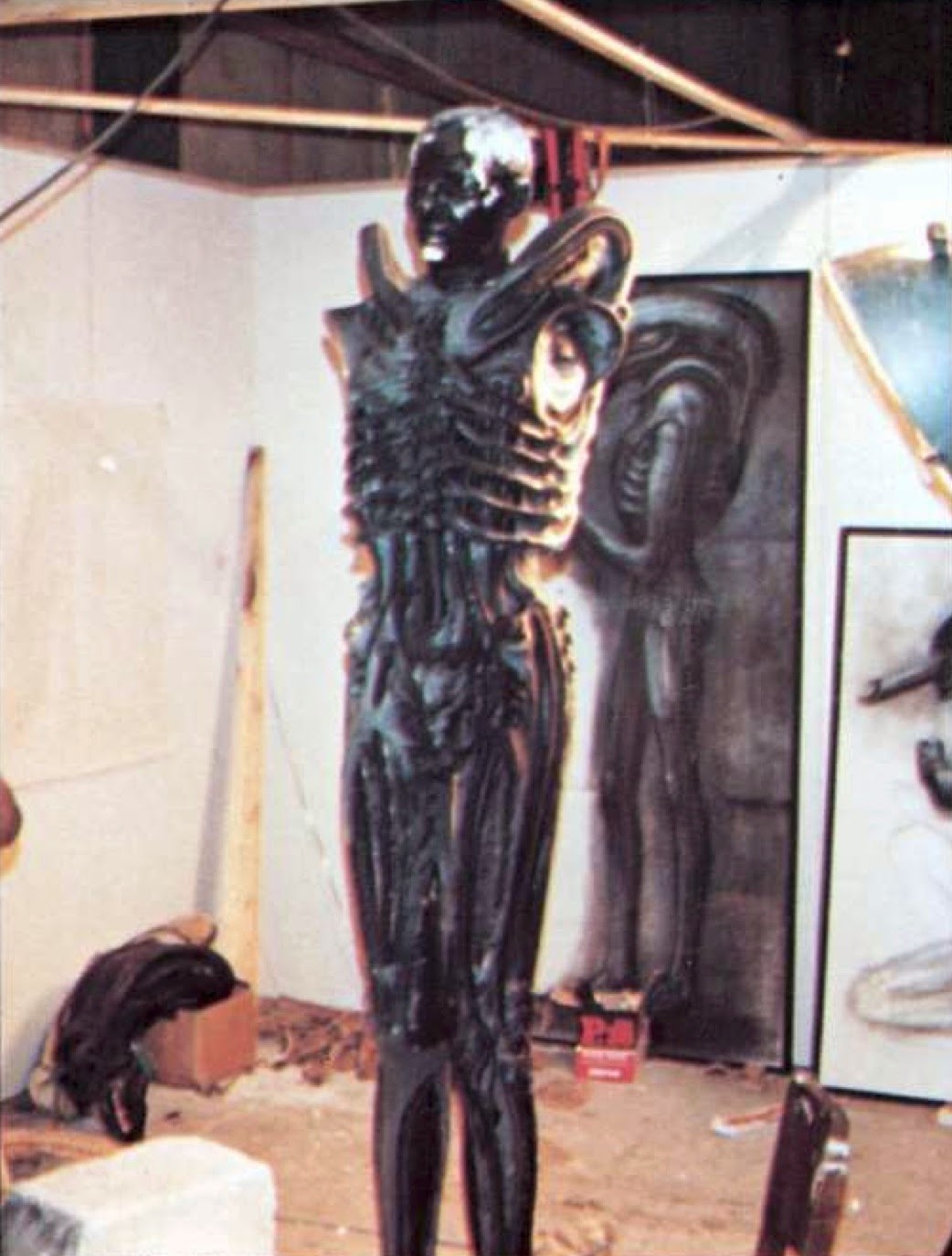 a) Starting work on Stage III of the Alien
a.i) Giger takes over after his dismay with Dicken's work
Giger saw Roger Dicken's attempts at the beginning of June and decided that it was a disaster.
Ridley asked if Giger could execute the creature himself, and so he agreed to try and so agreed to make the thing himself to make it succeed.
a.ii) Giger starts work through the night
Through the night he makes sketches for construction and then shortly afterwards Eddie Butler begins work on modelling the Alien stage III creature and work on this thing went on through the rest of the month.
Eddie worked a long time on the hand.

b) Arranging parts to use
Dan recalled that the plaster shop took a full body cast of the actor, and mounted it standing up on its toes on a wooden base, and Giger put it in his studio and began to build up in it with plasticine and bones.
He arranged technical pieces as well as the ribs and spines of widely different animals on the thin sheet of plasticine with an air conditioning duct, screws and human skulls into the shape of the alien.
As Dan O'Bannon watched as Giger , witnessing his feel for grace and grotesquery, started building up around this graceful Nubian figure as Giger added his pipes and tubes and running rotting sores, joints, pustules and various strange shapes.
It seemed as he built it up, he was coming up with something most bizarre.
Giger himself actually worked on one half of the costume so that one of his assistants Butler could do the other side copying his design as if it were mirror image . 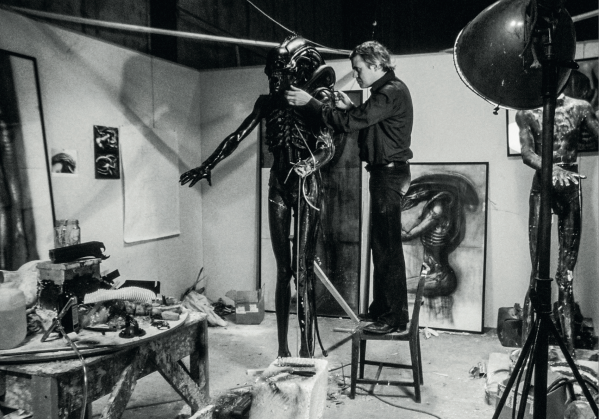 Ridley wanted the suit to be as thin as a contraceptive and as strong as nylon, so that he could have a man in the suit and it would be flexible enough to be able for the wearer to be able to roll up and have all kinds of things stitched into it, showing such things as the creature's sinews.
The latex would not give this effect, the material distorted easily and it would lose the transparency easily.

c.ii) The arrival of Andrew Ainsworth
On July 3rd, 1978, Andrew Ainsworth came to work on the transparent skin, he seemed to be sure that somehow the problem creating it could be sorted out.
He had masks for Star Wars and was supposed to be very experienced with all sorts of materials and would sort out how to make the costume transparent using transparent PVC.
c.iii) Building a special rotisserie over
As August 3rd 1978 came, they got to the point where all the moulds needed for the Alien's costume were lying in the plasterers workshop.
Andrew kept producing more and more experimental transparent costumes.
Howerver the ideal solution has still not been found, because the material was not resistant enough and tore easily
Andew built a special rotissery oven for this work in which the moulds rotated at a constant speed so that the liquid rubber was spready evently
Unfortunately Andrew still hadn't produced anything that they could use and time was running short.
c.iv) As time ran out
It's August 12th 1978,  and unfortunately by this time Andrew still hadn't come up with satisfactory results
The moulds had been badly damaged by his experiments and by the heat.
They had to be repatched up by the plasters in meticulous detail and even made all over again.
Andrew came to the conclusion with the idea that what they wanted could only be done with metal moulds.
Giger realised that they didn't have time to make such things and the hysteria in the production department was reaching a climax.
They would need to start filming very soon and still they hadn't come up with a single costume that could be used.
The shortness of times push them to realise that they couldn't do any more experiments and so make the whole thing out of latex.
They finally gave up their dream of makeing their dream of a transparent Alien III
However, as far as Giger could see the fact that Bolaji Badejo was black did not lend itself to this transparency effect, it had already started to become redundant and it didn't matter in the end if they couldn't see through it.
(Years later, he would be involved in the production of Species, where he designed a female biomechanoid, and his quest to create a transparent biomechanoid had been fulfilled, allowing one to see through parts of the creature, revealing muscles, veins, etcetera)
c.v) The end as Andrew Ainsworth saw it
From Andrew's point of view, they struggled to get the tear strength of the alien skin material to be strong enough, and so he was sure that he actually solved that problem.
A contingency from the production company including Ridley Scott came for a final showdown to Andrew's workshop
In a jovial and triumphant manner, Andrew slapped Garth Thomas the production account across his impressive chest with the Alien's foot made from the new super strong material.
Alas, Andrew picked up the wrong piece of material and it shattered.
"It's a wrap!" someone exclamed, and so Ridley decided to go without it.

d) Giger prepares for Rambaldi's involvement
The head was the first thing that was finished and a polyester cast of the head was finished by the last day of June.
The next step was for Giger to create a drawing plan to send to Carlo Rambaldi who would be creating a mechanised version of the Alien's head that was sent with a mould of the Alien's head very soon afterwards to Rambaldi at his studio in America.
Peter Voysey would also help to sculpt the Alien stage III.

f) Two women are brought on to help
By July, at Giger's insistence, two women, Shirley and Patty were brought in and taken on to help with the the modelling of the monster.
g) Creating a latex costume in August
In the car park studio, Giger's assistants Shirley, Patty and Butler are endlessly painting layers of latex on the new models.
Complete rubber moulds have got to be prepared in plaster as a result of the new method that they have decided upon, since plaster is more absorbent and can absorb water from the latex milk
Posted by wmmvrrvrrmm