a) Beast with signs of Delville's idol of perversity?
From HR Giger's work during the production of Alien, one can find glimpse signs of the zig zag motif from Delville's serpent down the front of the woman's breast in the picture Idol of Perversity in Giger's unused concept for the Alien creature, (work 369) that would have been created before Giger started on his Alien Monster series. We find the zig zag serpentine tail motif hanging down behind the creature.  Only a low resolution copy of this image found its way onto the internet and it would be interesting to see it in greater detail.

b) Blurred Questions
Perhaps one might ask if this was a concept that Giger had developed with the idea of a man holding a child either side of him but it's not easy to say exactly how this creature is formed,  I might ask if the arms are linked to the back of the head, and the way that it's face is formed is not easy to work out but this creature has eyes like motorcycle goggles

Rod Hull was a very famous British entertainer with his emu puppet back in the 1970s and it would have been out of Giger's urge to make the most out of any Radio Times image that he could find as reference material his work.

It might be nice also if he had the opportunity to watch Rod Hull and Emu on the television as well but one can only hope so much. 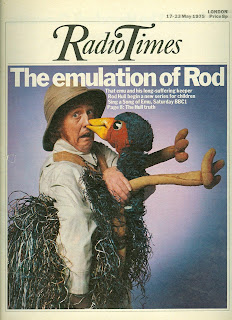 The two relevant areas side by side with the Radio Times cover photo reversed.

This would suggest that the brim of the pith helmet becomes the back of the alien head.

Emu's feet could become arms held out forwards from the alien but it wasn't explored, and perhaps emu's head facing Rod Hull's face becomes the length of the alien head. 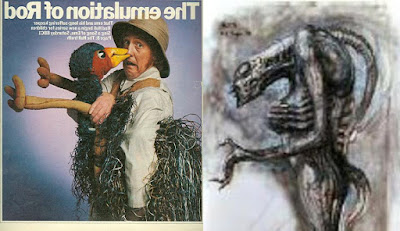 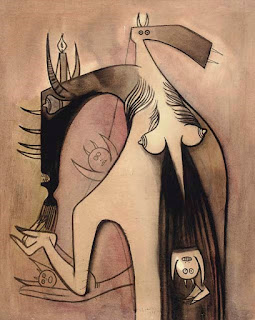 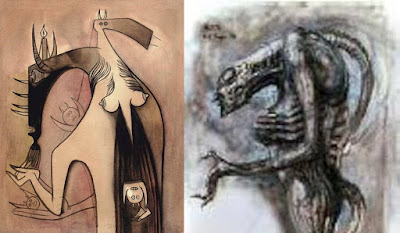 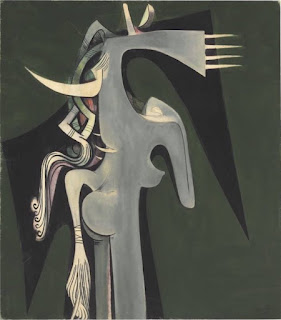 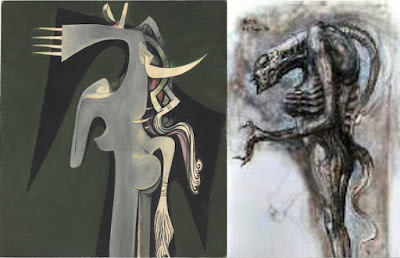