The book starts with a conflict between a communications conglomerate and an oil company involved in war simulations.

Soon there are other players involved as well.

A Japanese zaibatsu representing a community of Japanese-based corporations prepares to get involved as well.

Information brokers and spies flit around the outskirts of the conflict, trying to figure out what's going on. And most ominous of all - the Communist nations (the "C-Block") sit silently in the background, biding their time as the capitalists kill one another off. 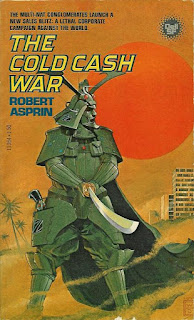 b) Leyland-Toyota
During the times of the first drawings,  Ron wanted to give names to the company that created the spacecrafts, and they talked about them.

He had an idea that

Since Ron Cobb might well have gone ahead and called the company Leyland-Toyota which was a sort of English/Japanese merger, but using those names would have invited trouble for the production.

He came with a different version of such a name, he changed Leyland to Weylan, basically just changing the first letter and perhaps he wasn't sure about the spelling.

Toyota had to be changed, and so Ron Cobb used the surname of his neighbour, a Japanese woman named Amy Yutani that he knew very well instead, instead which still had the Y and the T.

That resulted in a W-Y logo which Ron liked.

Leyland had a tendency to be mutable.

Originally Leyland Motors which started off in the town of Leyland in North West England, would do things such as have a joint venture with an Indian company Ashok Motors to create Ashok Leyland in 1954 building cars in India until 1975.

Perhaps a company such as Toyota seemed like a good idea.

c) Mesoamerican eagle emblem from Friedkin's Sorcerer
In the film Sorcerer (released in 1977), directed by William Friedkin who directed The Exorcist, the remote Latin American village Porvenir is heavily reliant on American oil company Lartigue and Co. oil .
This company send a group of men across the jungle to deliver unstable explosives to a burning oil field
The film looked as if it was be loosely inspired by Heart of Darkness, as if Friedkin were competing with Coppola who was off shooting his Joseph Conrad's Heart of Darkness based Apocalypse Now in the Philippines.
I might wonder Ridley knew about the movie since he liked Friedkin's The Exorcist, liked the idea of the use of an Mesoamerican style eagle and this sent him off to want to use the Egyptian winged sun motif

The joke got lost unless you looked closely at details such as labels on underwear, stationary and beer cans.

e) Weylan's origins in Lovecraft
However the named Wayland could also be found to be the middle name of Francis Wayland Thurston, a character who is the narrator of the story "Call of The Cthulhu" by HP Lovecraft , an author whose work Dan O'Bannon was very very familiar with.

A Francis Wayland in turn was president of Brown University from 1827 to 1855, a place which HP Lovecraft wished to attend.