Alien: Summoner of the Demon

leading from
Alien: Temple Of Mysteries
and
Dan O'Bannon's admiration for  HP Lovecraft

and
Alien: Creating The Alien
and
Exorcist
and
Dan O'Bannon 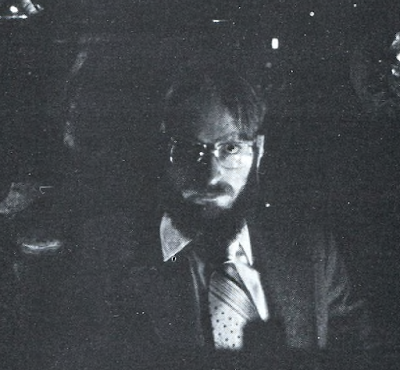 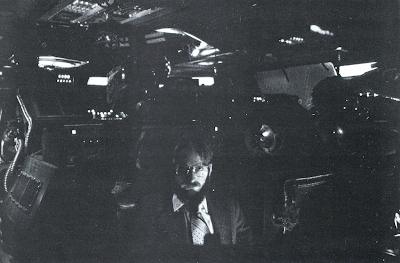 a)  The shifting circumstances of finding the Necronomicon

a.i) A story of a discovery in the Bibliotch National
The first version of Dan O'Bannon's story goes that Alejandro Jodorowsky had discovered something in the Bibliotech National, a document that was someone's PhD thesis which was a study of the actual Necronomicon that was peceived to be an imaginary book that HP Lovecraft imagined and wrote about, and that book among other things, contained an account of the Old Ones, their history, and the means for summoning.
a.ii)  The myth of  Jean-Baptiste Cohen
The student who wrote the thesis had since disappeared although Dan would reveal in 2004 to Fangoria that the author, Jean-Baptiste Cohen was deceased, that he had died very young at 25 in 1999, and didn't quite finish this particular dissertation. He wrote most of it, but since his death interrupted the completion, Dan felt that he had to finish the last part.

a.iv) The structure of this study of the Necronomicon
To stay with the idea that Dan received it during the time of Dune in 1975 which would have been before Cohen's death in 1999, Alejandro must have known that Dan O'Bannon was a great fan of Lovecraft, but this thesis was a study of the Necronomicon that quoted many individual. It was primarily written as a long essay quoting substantial chunks of the Necronomicon from different translations, in Latin, Greek and English. This was the nearest that Dan had got to the real thing.

a.v) Other versions of the Necronomicon
Dan was certainly struck by this and felt that it needed to be brought to the attention of English speaking readers. Decades after Alien was releases,  he observed how there had been numerous books marketed under the name of the Necronomicon. The problem was that when you opened them, they turned out not to be the real thing. He enjoyed the one with an introduction by Colin Wilson published in 1993, but not the one by someone named Simon, and he became very impatient of these fictional Necronomicons certainly because they were unrealistic and as far as he could understand, he had seen something very close to a real thing.

a.vi) The need to present the most realistic Necronomicon of all
Even Lovecraft himself used to say that he didn't have the imagination to write the Necronomicon, and that should have been a warning to everyone so that no one else should mess with it.  Dan became fed up with these other fake Necronomicons - not because they were fake, but because they were not any good. So in version two of Dan's story about the development of his tome, by an amazing coincidence,  presumably some time after Jean-Baptiste Cohen died in 1999,  at that exact moment he came across a copy of Cohen's work.

a.vii) Producing that Necronomicon
Dan decided that it was a good time for him to make this translation into English and show people what the Necronomicon should be. Towards the end of his life, he spent a good ten years carefully translating the contents of the thesis into English and finally got it to a point where it was ready to be seen by the public at large. All that remained for him was to discover a way to market it so that people who wanted a copy could obtain it. He passed on in 2009 and at some point in time it will be published by his widow Diane.

b) Sorcerous intentions of the Subconscious
b.i)  The Necronomicon within
One might stop to take a look here at Dan O'Bannon as someone who possessed near enough an actual version of the Necronomicon that H P Lovecraft might have dreamt about. Then he was being introduced to HR Giger who was providing images of majestic demons of a Lovecraftian nature that inspired Dan with ideas for his Alien script and Giger for his forthcoming book would be using the name Necronomicon, (I should say that I don't know when Giger gave his book project the title).

b.ii) Visualised as an HR Giger monster
Dan would visualise his monster for his Alien script that he was writing, as something from Giger's painting and Giger would be the one to design the monster.


c) The back story of the grimoire
c.i)  Blackest grimoire of them all
The Necronomicon of Lovecraft's fiction was known to be a grimoire, or a book of black magic spells. It's legendarily known as the blackest of them all. It was written by an Arabic scholar.

c.ii) Another race of beings waiting to return
The central theme of the Necronomicon is that our world, the Earth, was once inhabited by another race of being, who in practising black magic lost their foothold here and were expelled. Yet, they continued to live outside our realm, waiting to take possession of Earth again. The Necronomicon contains incantations to hasten their return, as well as other spells to repel them. That was the basic content of the book.

d.ii) Demons from the collective sleep
Dan was summoning up devilish forces, demons which lived in the collective sleep of all humanity, and he knew they were everybody's because they were his. He was inventing a bad dream, imagining a creature that mankind can not distance itself from because it emerged from inside. Dan was gazing down into a space that was both a cave and a womb, the unconscious mind and Hell. In that space, something was born, it was vile, and unclean. Someone would be attacked by this thing and be unable to defend him or herself from it. It gets on the face, it smothers that person

d.iii) Demon reflecting a state of mine
Dan would admit in retrospect that this act of summoning a demon might not have been a very wise ambition, but it accurately represented his state of mind during the writing at the time, from 1976-1978.
Of course this is might as well be a form of extreme Lovecraftian enthusiasm , but he might as well have been burnt at the stake for less back in the 1600s.

d.iv) How real is any of this?
If the Necronomicon study found in the library was as real as Dan might have wanted us to believe it was and it had inspired Dan in some strange way to say what he did about the alien being a demon, we might start asking ourselves again exactly what exactly is the nature of this thing that Dan had unleashed. 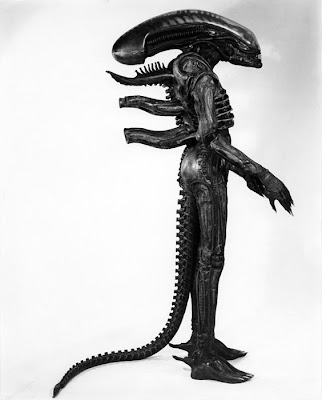 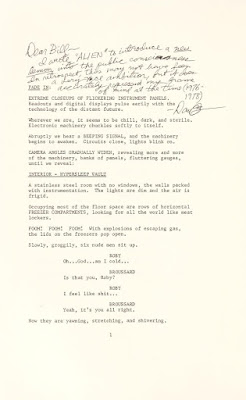 e) Giger's Alien as a postmodern Pazuzu
e.i) Exorcist as nothing but funhouse evil
This demon would make the actions of Pazuzu who had been unleashed onto the public by way of The Exorcist in 1973 seem like funhouse evil.
e.ii) A character from Syrian and Babylonian mythology
It was that Pazuzu which interestingly turned out to be a character from Assyrian and Babylonian mythology, king of the demons of the wind, and son of the god Hanbi. Pazuzu stood with four wings extending from his back, and often shown with an erect male member .
Meanwhile Giger's biomechanoid alien beast started out in the painting as a large erect male member extending from its groin (which Ridley compared to an umbilical cord) with numerous pipes and winged membranes extending from the back. The creature in the movie would eventually have an long tail that at times would extend from the front and have four pipes sticking out from its back. However Giger wasn't quite sure whether they should be wings or pipes.
e.iii) Pazuzu's four wings become the alien beast's four back pipes?
The four pipes on Giger's beast were there in his 1976 Necronom IV painting but look possibly derived from the wings of a sphinx in Ernst Fuchs' "The Triumph of the Sphinx".
(See also:  HR Giger: Necronom IV (work 303) (1976) references Ernst Fuchs' Triumph of the Sphinx (1966)?)
What exactly was this all about?  Are Pazuzu and Giger's Alien distant relatives with the same four winged gene, but the ones on Giger's Alien had transformed into useless stunted pipes?
e.iv) Similar bifurcated cheeks
As it went , details of the face structures of the Exorcist movie head relic and the Alien face showed that some thought went into integrating the two, including the bifurcated cheeks
(See also: Small pazuzu head relic from The Exorcist and A touch-of the Pazuzus in the huge skull in The Creeping Flesh)
f) An attempt to incorporate Pazuzu into the Necronomicon myth by Simon
f.i) Pazuzu in Simon's Necronomcon
By 1977, in a publication Simon's Necronomicon, attempting to provide version of the Necronomicon, an incantation to evoke Pazuzu was included and described him as Lord of all fevers and plagues, grinning Dark Angel of the Four Wings, horned, with rotting genitalia and he was said to be the brother of Humwawa.

f.ii) Assyrian origins of Pazuzu
Although the book claims that Pazuzu was of Sumerian origin,  the name only goes back to the rise of the the Assyrians in the first millenium but there are thoughts that Pazuzu may have appeared in Sumerian myth in the form of Imdugud, a lion headed eagle. 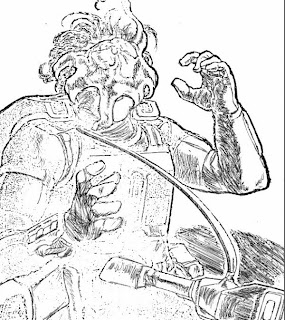