a) Confusions
For years I wondered what was the inspiration behind the strange structure in "Soft construction with boiled beans (premonition of civil war) ". Meanwhile it becomes difficult to names the parts of the body, because at the lower half, what should be a leg divides into two arm and what should be an arm at the top of the picture extending from upper body suddenly turns into a leg.  One structure oddly supporting the other although it seems that the lower and upper body are tearing themselves apart.

b) Star like structure?
It almost resembles a broken chair frame made from organic components, perhaps it forms an incomplete Star of David with the lower hand, the head and the buttock extension forming points of a triangle with the hand grabbing the breast, the top right knee and a haricot bean at the center bottom forming and inverted triangle, and still it begged the question about where the ideas were coming from after finding out about the main secret behind "Autumnal Cannibalism"

c) Comparisons with Goya images
On the 25th of April, 2015,  visiting an exhibition of Goyas illustrations in London I noticed similarities between various firms in the painting and images from Goya Illustrations: (See also Inspired by Goya illustrations ? )

d) Comparisons to a plough?
On the 14th October 2015, I decided that roughly the thing could be compared to a propped up old plough. They come in multiple shapes and sizes. The mouldboard and chisel becomes the foot at the bottom right , the horizontal part beneath the mouldboard called a landslide even gets referred to as a heel. The beam becomes the lower limb extending from the buttocks to the hand, and the middle supporting limbs become the handles.  Perhaps the wheen becomes the front lower hand. Without having to think about it too much, it would be a familiar sight in rural areas that would get ingrained into the unconscious. 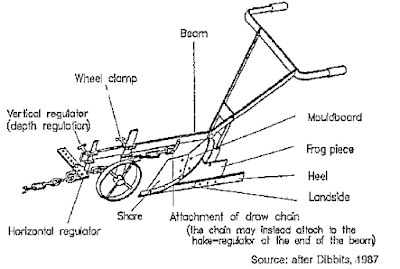 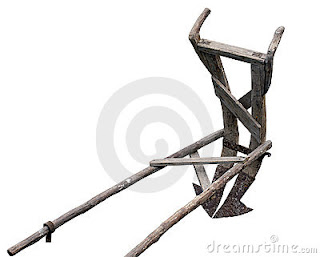