Giger had of course spent much of 1978 in England working on the movie Alien.

a.i) One might imagine that he kept in contact with at least one person from England, and so if someone hadn't been sending the complete magazines to Giger, it looks as if that person had been sending Giger cuttings including images from The Radio Times which was a magazine that nearly every household would have to find out what was on BBC TV and Radio

a.ii) Perhaps Giger was supposed to have liked the surfboard merged with the keyboard and the idea of the famous musicians depicted in the illustration, Morton Subotnik, John Cage and Frank Zappa on the crest of the Californian new wave, but the other thing to point out about this image is that it might reference Salvador Dali's Daddy Longlegs of the Evening - Hope!"

b)  Comparisons of shapes and structures

So, what you have in the West Coast Story illustration is the banana shaped surfboard and you have the upper part of that shape to the left of the centre, and also you have the huge guitar and that's stretching across the centre of the ZDF painting.

Giger has put a palm on the top of the guitar and turned it into tendrils emanating from a skull.

The water at the bottom of the illustration looks like strange squiggles of blackness and Giger has turned them into dark tentacles across the painting. 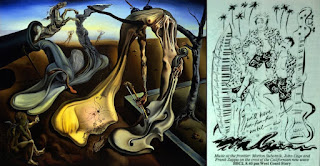