Possession: The Beast in a Berlin movie.

leading from
The Delville in detail 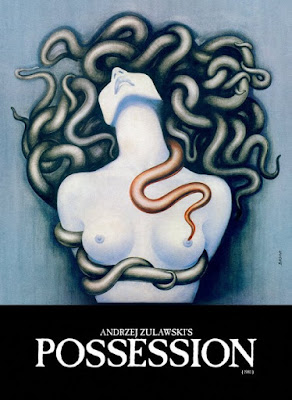 a) Planning the monster

When the eminent Polish film critic Bogozlav Mikhaelish read the script for Possession, he urged Zulawski not to show the monster, but this was advice that the director did not heed

Working out the creature for the film wasn't easy. Andrzej had an idea about what he wanted but not exactly, he had an idea but didn't know how to put it on paper and so he showed Marie-Laure Reyre some pictures that had cut out of magazines, that gave her some idea of how such a creature should look, such as various pictures of golems such as golem statues from Prague

They started meeting all the special effects people in France, in England, and in Germany where they were going to shoot the film and then Andrzej went to New York and saw the movie Alien there. Immediatley Andrzej said "That's the guy that we need for our monster" Then they tried to get in touch with Giger, but his response was that he was too busy working on two other films. he told them "The person to do this is Carlo Rambaldi." and they said fine. They thought that Carlo might be in Italy but he turned out to be in Los Angeles, but while they were in New York, while Rambaldi was living in LA.


Since, Marie-Laure had battled well for the film and even took it to the Berlin Senate, he felt that he owed her something, She had backed the project, okayed Sam Neil from Australia and Isabelle Adjani despite her reputation, he listened to her suggestion for Carlo Rambaldi who had worked with Steven Spielberg.

Andrzej thought "Could we afford his huge fees?"

She had lived in Italy and knew the Italians, so Andrzej went ahead with her decision.

They went to LA and helped by Giger, met Carlo who at the time was working for Oliver Stone on the film The Hand. They entered his studio and were surrounded by his strange infernal machinery and creatures of rubber that without special lighting that might lead one to think "What's that piece of rubber meant to be?."

Rambaldi thought about it for two or three days before replying, he had read the script, he liked the story and had talked a lot with Andrzej and seemed to trust Marie-Laure , and after four days accepted. He appeared to understand what Zulawski required when he knew how he wanted to use it in film especially at the finish, and Rambaldi was the first real special effects person that they met and would be someone who could complete this in reality.

They went back to Europe but they had to keep checking on the development of the creatures of which there were several. A lot of designs and drawings and miniatures were being sent around for that reason. It was not easy to start building the special effects in LA while they were in German. But Andrzej was impressed with Rambaldi's drawing. He didn't want the creature to be identified. First it would flow in the metro as a whitish pink puddle and later as it were, coagulate into a Sam Neil. Rambaldi's drawings were done with a strong hand but they were brilliantly unclear

The writer Frederic Tuten realised only after doing this film that there was disparity between what was written on the page and what was seen on the screen. He himself didn't actually know if there was going to be a physical presence of a monster, but always assumed that it was something that the viewer would see when there's a shot where the first detective says "what is that?" and they would see a bathroom, a curtain and a sort of an eye and that would be about it, the viewer would see the eye and imagine the rest of it, but it seemed that he didn't know what Andrzej had in mind, especially the where he was always had in mind the physical presence of a monster. In fact he didn't know until he was in Berlin when he had to do a rewrite on the set while the film was being shot

Marie-Laure said one day to Frederic Tuten " you want to come with me to the airport"
He asked "what are you doing?"
She replied "We're going to get the monster today"
He responsed " what monster"
Marie-Laure was obviously surprised that Tuten didn't seem to know
"Don't you know Rambaldi made the monster?"
Indeed Tuten didn't know anything about this.


When they came to Berlin to prepare the scenes, the finished beast was to arrive for the shooting. Marie-Laure had to go with producer Jean-José Richer and pick up Carlo at Tegel Airport in Berlin, and he arrived with five or six wooden coffins which had all been as big as the monster of the film. The customs officers were all very curious and wanted to know what was what. Fortunately they had a letter from their so-called Co-Producer, the Senate of Berlin, which stated that everything they needed should be done.

Carlo was there with his five coffins and still two customs officers wanted to have a look inside. They were opened and it was packed with rubber tentacles. Marie-Laure was even startled herself, even though she had seen the drawings and witnessed the process of its development. She had been to LA several times, and the last time only two weeks before. But to see these things made from plastic and other strange materials revealed in a crates that were near enough coffins at customs causing the custom officers to look startled before quickly closing the creates up again, became a strange surrealistic experience. She thought that the custom officers, although they were smiling must have thought she and the others were crazy.

Carlo was somewhat surprised "What!"

Carlo asked "What about preparations?"


"You've got all night" Zulawski told him

Asked Carlo "How long to shoot the monster?"

Zulawski explained "For all the scenes with the "character", we have 2 days, for all angles"

Zulawski added "We have 30 or 40 shooting days altogether and two days for the "monster" !"

This was obviously not quite the situation that Carlo thought he was walking in to, in light of the work he did in his other movies where a lot of work went into his creations to get it right for the brief shots in the movie. They might have been dealing with something that was near enough a simple but effective monster, but even his smiling alien puppet in Close Encounters Of The Third Kind took a lot of work.


"You know how long I had to do the closeup in Close Encounters of the 3rd Kind?"

"The little Martian walking out of the UFO?" asked Zulawski

"Yes, the time to find the right lights and animation" explained Carlo

Andrzej responded "So, what now?"

"I'll show you what I've got" said Carlo

Rambaldi opened his car book and Andrzej had the biggest shock every. In the crates, he saw something that looked like a huge pink condom about 2.5 metres long and this would be the thing seen briefly in the movie with electronic eyes blinking and a mouth that breathed, but the thing looked like a huge male member. This was a problem that Andrzej hadn't expected "It doesn't look like your drawings"

Zulawski obviously wondered what he was going to do with this monster like this
"That's not a symbol, it's a penis You made the thing. It's just as if I filmed you without your knickers"

Rambaldi felt apologetic "that was a mistake"

However there was obviously no turning back and it was best to make use of what they had..

Andrzej responded "Obviously! I can make one shot of it. Not showing the size or the details. But you must make up the rest."

Then the spirit of Cinecitta returned to Rambaldi who suddenly felt twenty years younger "You'll have it tomorrow, trust me."

d) Last minute monster
All through the night, he and three men from the art department made the monster which would wriggle on the bed like and octopus. They made it with film stock pieces of wood, and invisibl black strings moved around by the whole crew in the small stuffy room in Berlin close to the wall, it was an incredible sight. The fat Germans were swearing "Shit! Shit" while making the octopus move and Andrzej's assistant was lying on a mattress under the octopus to move it. It was a rush job, but it was also a Polish sci-fi movie made with bits and pieces which made Andrzej feel at home with the project.

Five or six days later they started shooting the scenes and it was a lot of work since they were making the film on a small budget. Back then it took a lot of time to shoot a film with special effects and everything had to be prepared, with the lighting and other machines had to be set up correctly. Andrzej was very patient and Carlo went along with it, but they had to adjust the schedul to their budget and keep to it


Rambaldi was very proud of his creation, putting it in his press books and would continue to show it around.

The resulting monster caused some headache and for a while there seemed to be no solution, and the   film became easily mistaken for a horror movie with the American buyer cutting half of it releasing it with another an actual horror movie, which was brutal and harmful for the movie.

e) The half man half monster thingie
There was a scene where it looked as if Sam Neil was playing a half man half monster entity in the love making scene. Rambaldi did not create the human part of this monster.It was someone who looked enough like him, or at least his hair did. The viewer could think that it was Dam Neil although it was only a stand in for him

f) Hopes for another movie with a monster
Towards the end of his life, Andrzej had thought about making another monster movie, and his producer turned to Guillermo Del Toro for a design, but it never came to be.