Monster concept for John Carpenter's
The Thing inspired by Alien

Alien Echoes
a) Kuiper's concept beast for John Carpenter's The Thing
Before Rob Bottin was signed on to John Carpenter's The Thing, Wisconsin artist Dale Kuipers was hired  to conceptualize the Thing. Kuipers envisioned a mandibled parasite that would clamp onto a victim's head to probe and analyze brain patterns to inside an exact duplication of the "host." The Thing would deposit eggs into the person's esophagus at the same time to be nurtured by the host's food intake. This is just one of several of Kuipers' concept paintings, each showing various functions of the creature. In addition, Kuipers built a model of the Thing in its final, towering form. Toy soldiers indicate the scale. (Cinefantastique, vol 13, no 2-3) 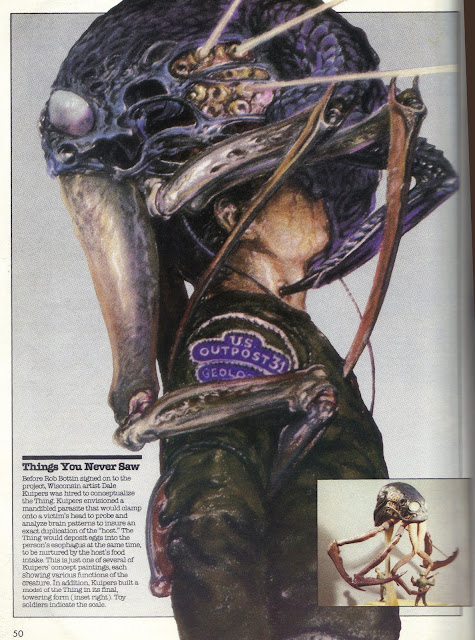 b) Comparison to The Facehugger
One might take a look a look at how this seems to be very much like the Alien facehugger concept from alien than deposits an egg down the throat of the host and  becomes nurtured by the host's food intake. The story of The Thing featured an ancient derelict spaceship discovered in the Antarctic and then they find the frozen remains of the shape shifting creature. 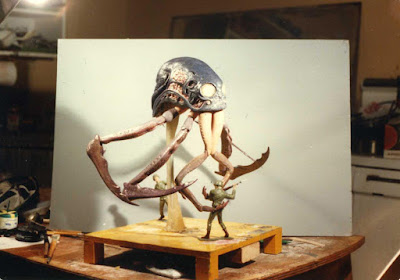 c) Kuipers back story for The Thing
The idea that Kuiper had with about creature in The Thing was that "The Thing is a hybrid creation of a distant galactic civilization that hoped to colonize different worlds. They were not a warring species, and so developed a creature that would eradicate any hostile elements from the world they desired to inhabit. This creature was like a virus that would infect mass populaces of other worlds and result in the planet-wide genocide, thus clearing the way for bloodless dominance by its conquerers. The eradicators were sent to many worlds and suffered many different fates. The one that arrived on Earth landed in the wastes of Antarctica and was quickly frozen in a shifting lake of ice. There the terror slept in suspended animation for 4000 years" (Dale Kuipers Sketchbook  See: https://www.facebook.com/The Thing Legacy)
d) Although I've seen this article decades ago and had the urge to document this for some time, the urge to finally create this page was inspired by seeing an article at http://www.blumhouse.com on October 2nd 2015,