leading from
From Piranesi's Carceri to Herge's Unicorn seawreck to Giger's ZDF to Jim Cameron's whole sideview of an alien queen?
a) What this might amount to are the upper slanting beams becoming the head crest, an arch to the left becoming the bend in the tail, stairways at the bottom becoming the feet, arches and slanting beams in the centre becoming the queens main torso. 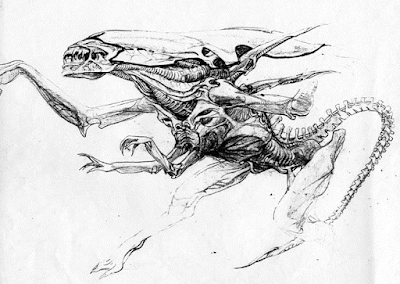 b)What the dungeon illustration does for the drawing is help to abstract an idea that he had already slightly and I suppose the artist wasn't really really trying to stick to the dungeon drawing, but it gave him a general idea about what he could do.

d Stairs become legs and rope above becomes the tail 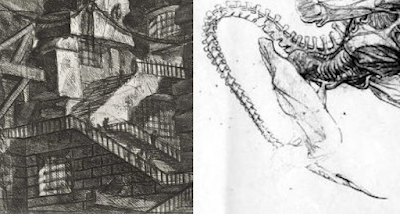 e) Stairs and leg on right

h) One might look at how Hergé seemed to transform the pully into a jelly fish in his Unicorn shipwreck illustration from The Adventures of Tintin and Red Rackham's Treasure which amongst other images I imagine referenced the same Piranesis illustration and I think that the Alien Queen side view drawing references the the Unicorn shipwreck illustration and so I think that the pully in Henu Barque terms represented the three rudders, and there are these three shapes near to the front of the head shell that would have been based on the shapes on the jelly fish's body which in terms of the placement of the winch in the area of the beams that I think became the head, which are enough in the right place. (The jelly fish image as been reversed)