He came to Stan with the idea of putting two men inside a giant alien queen suit, and Stan's first thought was "This man is out of his mind." because nothing had been done like that before.

In the next moment, he trusted Jim, thinking that since he had imagined it, then Stan and his company could probably do it.

When they worked together,  Jim took a drawing of Stan's and redrew again. They went back and forth like that, planning the creature out with Winston's creature constructing expertise in mind.

At one point, the two of them were sitting at Jim's house, both of them drawing different parts of the Alien Queen, with Jim on one board and Stan on the other.

b) Alien Queen with backward double knee joints and long toes, and four arms, by Stan Winston. The suit idea looked as if they intended to have one of the puppeteers legs inside the upper part of the Alien Queen's legs

c) Alien Queen with backwards knee joints by Stan Winston, and only two arms. Still with the puppeteer's legs in the upper part of the queen's legs.

d) Alien Queen with backwards knee joints by Stan Winston but with the extra pair of arms. One might ask exactly why the small second pair of arms were added.

e) This piece uses the same shaped head as the previous image by Winston, but turns the legs around to give them forward knee joints.


g) Jim Cameron's Alien Queen side view concept drawing design continues, being developed towards the way it would look in the final film.

h) Testing the alien queen concept
Jim Cameron's idea was that it was basically a crane that's going to move up and down and they would built a creature around it and they would have the guys inside dealing with the arms. Originally it was going to be a test of the fibreglass plate (?) with the puppeteers inside and then they started mocking up the whole thing and covered it up with black rubbish/garbage bags, and tested it out in the carpark/parking lot behind Stan Winston's stop with Jim Cameron shooting it. One they saw it could work and that they could do it for real as a puppet, involving two people in a suit with animatronics. 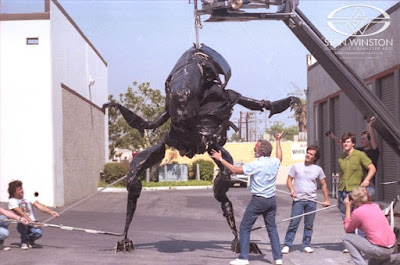