Alien Resurrection: Into the Living Landscape:
Creating the viper's nest

a) The strange scene
Ripley becomes separated from the crew of the Betty when she is pulled by the aliens in through the gap in the floor in the corridor and she falls into a pit filled with aliens or as it intertwined in a slimy mass.

She lands on this living carpet before passing through its central sphincter as if disappearing into the writhing horde.

From one point of view, this scene was very important in order to come across something that was terrifying.

From another more important view, it was designed to be one of these abstract scenes that not everyone was going to immediately understand.

It was in a way a sensuous, sinuous world of parts and Ripley was surrendering to this strange thing.

Tom Woodruff understood that the "Viper Pit" place was symbolic of a den of snakes.
To Sigourney,  it might have been something that Giger and Ridley Scott would have wanted to put in the film.

In terms of this film, it was ideally the sort of odd thing that might have made people ask questions about exactly what they were looking at and what it was supposed to be. 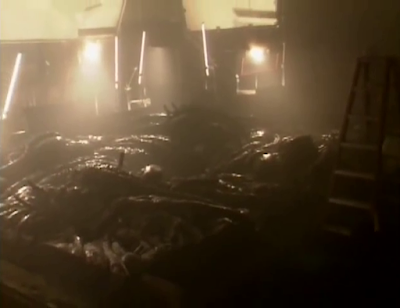 A floor surface was sculpted.

It was a mixture of rubber, textured floor, but with prosthetic and animatronic and costume pieces animated into it.

The four polyfoam mats covered with sculpted alien shapes, were butted together on an elevated platform creating a 20 by 20 foot surface that came to life.

It contained tentacles, tales of aliens, a couple of aliens.

Twenty to thirty puppeteers, the exact number was soon forgotten, a challenge to coordinate controlling various alien body parts - from slithering tails to shiny heads to gesturing fingers - crouched beneath a raised platform of slime and sponge plastic, in some cases they were underneath holding part of the foam sculpture and undulating it, keeping it alive.

c) Organising around Sigourney
Woodruff and Gillis were organising the scene and Woodruff would play one of the actual aliens in the environment.

They took their cues from Sigourney, because she was the focus of the scene and everything they were doing, while it was in the background, was also a character in its essence, and it symbolically showed her sinking into the world of the aliens

They talked with her about what her emotions in the scene would be and how they sorted out their rhythms to that, perhaps these would not come across overtly on the film, but it would be there on what they considered as a subtextual level.

Sigourney was actually very happy with the scene considering one of the most memorable images of any of the films
Source Quotes.
Posted by wmmvrrvrrmm