leading from:
Alien vs Predator:Requiem 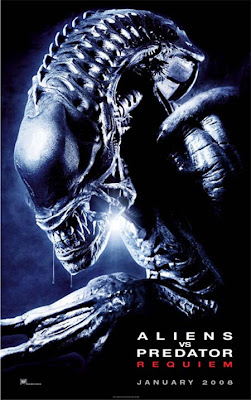 a) A new design for the alien warrior head lead to a creature with large fans and ridges along the skull that resembled Predator weaponary as if this were a sign of their genetic tampering to make their biomechanics reminiscent of the Predator's creativity as shown in the AVP movies. There were also attempts to bring back Giger's biomechanic style into the design which might be said to be visible within the new neck area..

Greg Strause talked about the aliens biomechanic look being based on the warrior aliens from Alien, but Colin Stause talked about the alien warrior's biomechanic look being due to the fact they try to conceal themselves in the spaceship. But if a part of the Alien Vs Predator: Requiem movie had the aliens warriors bursted from humans running around aboard the Predator spaceship, or at least it was scripted to, then we might even agree with the idea and take note of how parts of their ridged patterns also resemble the style of the Predator's armour designs.
b) Justin Murray's concept drawing shows an Alien warrior and this appears to be the only one released for the public, while is shows a creature with a face that's not much more than an oversized mouth and large jagged edges along the top, it doesn't show anything that resembles the armour of the Predators.

c) They had the cinematographer Daniel Pearl from that film working on AVP:R, but in hindsight came the suggestion that the angular ridges of the alien warriors would be as chainsaw teeth in homage to Texas Chainsaw Massacre.

d) The addition of the Predator style armour design into the head came at a point not spoken of, however here are a couple of examples of Predator weaponry and armour as featured in AVP and AVP:R for comparison.