Alien vs Predator:
Aliens In A Puzzle Box Pyramid

leading from
Alien Vs Predator
and


a. in 1998, magazines published statements that Vincenzo Natali was being offered Alien 5, (and later in 2020 Vincenzo was able to state that it was nothing more than a rumour)

However Vincenzo Natali was famous for directing a movie called Cube which is about a group of people who are trapped inside a giant deadly puzzle box with chambers that move around almost like a Rubik's cube.

If we go along with the idea that the director brings something from their own creative past into the movie story to leave their mark, the thing that I would jokingly think would be that the characters of the film visiting the alien derelict, become trapped inside and then its interior turns into a puzzle box and here they encounter the aliens and must escape from them.

It might sound like a ridiculous idea but soon Aliens Vs Predator was soon made by Paul WS Anderson and it showed that someone else out there was having such an idea.

However Vincenzo was happy to think years later on "Yes. Screw this Predator vs Alien crap. Xenomorphs in the Cube is clearly the future of this franchise. " 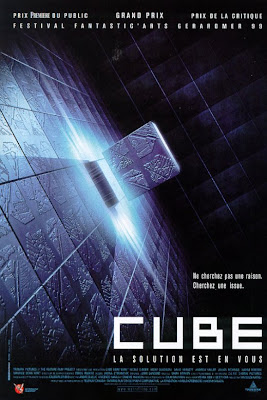 b. The story involved the characters visiting a giant pyramid that had shape shifting puzzle box interior that served as a place for the young Predators to battle with the alien creatures.

One can not really grumble about this borrowing, it was something that was going to get into the Alien mythos one way or another by not by Vincenzo's own direction but by Paul WS Anderson who acknowledged that he was friends with Vincenzo so maybe this act of borrowing is almost excusable.

During this time, Natali was to direct a film "Necropolis" with the script by Anderson although it didn't finally happen.


c. However when interviewed and while doing the commentary for AVP, the actor Lance Henriksen who played Charles Bishop Weyland, compared the pyramid to a rubik's cube when it changed shape inside.

L'Ecran Fantastique: "In the film, Bishop and the other characters are often trapped in a pyramid in Antarctica ..."
Lance Henriksen:"The atmosphere in this film is arranged so that part is pretty scary. This is partly due to the claustraphobie generated by this pyramid which is changing shape, like a Rubik's cube"

d. The pyramid idea was inspired by the pyramid encountered on the alien planetoid in the original Alien script by Dan O'Bannon which housed the alien spores, and Paul Anderson talked openly about this.