If the First Bite Doesn’t Do It, the Second One Will,
By CARL ZIMMER 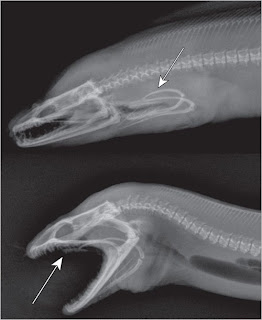 Rita Mehta did not have aliens in mind when she began to study the moray eel. Dr. Mehta, a postdoctoral researcher at the University of California, Davis, where she studies the evolution of feeding, was intrigued by the dining habits of morays.

They are impressively successful predators, able to devour large fish whole, and they grow to more than 10 feet long. Unlike other big-fish predators, morays have no fins. They hide their snakelike bodies in the crevices of coral reefs, waiting to strike. “No one knew much about their feeding behavior,” Dr. Mehta said.

Morays belong to a group called ray-finned fishes that includes a vast majority of fish species, like tuna, goldfish, salmon and trout. Most ray-finned fish use suction to eat. To catch prey, they suddenly expand their mouth cavity. The negative water pressure sucks in the prey.

A second suck pulls it back to the throat. At that point, the fish typically use a set of bones, pharyngeal jaws, to pack down the food and push it back to the esophagus.

Working with Peter Wainwright, an expert on fish biomechanics at Davis, Dr. Mehta filmed morays grabbing chunks of squid. The scientists discovered that morays did not feed like typical ray-finned fish. “These fishes are not using suction to capture their prey,” Dr. Mehta said. “They’re strictly biting.”

The strategy is not a matter of choice, Dr. Mehta found. Suction demands a set of powerful muscles and bones to change the shape of a fish’s head quickly. In morays, those muscles and bones are weak and small. Dr. Mehta’s findings left her puzzled. How could morays be so good at catching fish if they had no way to suck in their prey?

In other fish, pharyngeal jaws are simple blocklike bones. But the morays’ pharyngeal jaws looked as if they could deliver a vicious bite, despite being lodged deep in the throat. “They look like these incredible forceps,” Dr. Mehta said.

It turned out that scientists published observations of the pharyngeal jaws in the 1960s, but their work was forgotten. “These were exquisite papers, and I still don’t understand why no one followed up on them,” Dr. Mehta said.

Forty years later, she took a closer look at the jaws and observed that the muscles that connected the jaws to other parts of the skeleton were different from those in a typical ray-finned fish. Unusually long muscles ran from the jaws to the moray eel’s skull, for example.
Dr. Mehta began to wonder what would happen when those muscles contracted. “If these muscles shortened, they could pull this jaw really far forward,” she said. “But then we thought, ‘Oh, come on, does that really happen?’ ”

Dr. Mehta rigged up a high-speed video camera that could peer into the mouth of a feeding moray. “When we got the movies, we sat and stared in disbelief,” Dr. Wainwright said.
The movies showed that when morays lunge for prey, they first grab it with the teeth on their front jaws. The pharyngeal jaws then shoot forward out of the eel’s throat, into the mouth, and snap down on the prey.

The eel can then open its front jaws, releasing the prey, while the pharyngeal jaws move back down into the throat, dragging the food with them.

“It seems that almost everyone we showed the movie to said ‘My God, it’s like ‘Alien,’ ” Dr. Wainwright said. “It really does have this monster-from-outer-space feel to it.”

Dr. Mehta and Dr. Wainwright published their results in the current issue of Nature.

As strange as moray jaws may seem, Dr. Mehta sees their evolution as just a matter of tinkering with standard fish anatomy. One central step in the transition, Dr. Mehta proposes, was the loss of the front fins. The bones that once supported those fins could now take on a new role, anchoring muscles to help move the pharyngeal jaws. The other muscles that move the jaws have the same attachments found in other fish. But in the moray, some have become bigger or longer.

Shifting from suction-feeding to an alien bite may have helped turn morays into the top predators they are today. Suction works well for catching small fish, but big prey can escape the inflow of water.

To use suction, a fish has to expand its head, which can be difficult in the narrow crevices where morays often hunt.

A biting set of pharyngeal jaws, on the other hand, may have allowed morays to catch larger prey. Its front set of teeth needed only to grab onto part of an animal and hold it in place for about half a second while its pharyngeal jaws moved forward into the mouth. Now it could eat fish that were bigger than its gape.

Dr. Mehta is investigating other fishes to find clues to how the moray’s double bite evolved. So far, she knows of no other animal that feeds this way. At least on this planet.
H. R. Giger, the Swiss artist who created the alien for the director Ridley Scott, was amused by the researchers’ discovery.

“It’s funny,” he said. “The double teeth came when I did my first drawings. Ridley Scott told me to make it so that it could move. I hadn’t studied any animal. My instructions were that it should be somehow frightening and horrible, and I did my best.”