Leading from:
Alien: The Creature

a) The dissatisfaction of Dan O'Bannon
Before Ridley stepped in to have Giger design the alien, we find out fragments of information about a design for the creature by Carlo Rambaldi who later would create the alien mechanised head. The brief references to this only come from interviews with Dan O'Bannon expressing his dissatisfaction with Rambaldi's concept when he was the first man hired by Fox to actually design the creature. 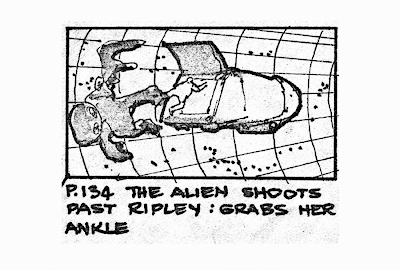 However in 2010, the pre-Ridley Scott "First draft storyboards" drawn by Ron Cobb and Chris Foss together presented in Alien Anthology blu-ray set, there appear to be depictions of the alien that looks approximately like a multi-eyed marshmallow man, whether this was due to the sketch being so rough that it could look like anything and perhaps was roughly inspired by Ron Cobb's lobster like humanoid or if this is the way Rambaldi's creature could have looked is another question, however in all the other storyboards found in this series, great effort was made to reproduce all the designs correctly.