leading from
Prometheus: Casting the roles
and
Noomi Rapace 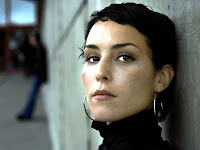 a) Noomi Rapace played Elizabeth Shaw
Noomi Rapace played Elizabeth Shaw, a researcher and archaeologist. The character Elizabeth is English but grew up in Africa because her  father was a missionary. Her faith in God came from him and she has a strong inner self, an inner light and is very stubborn and determined. She was probably the most whole person that Noomi Rapace had played. However the character lost her parents when she was a child and so from early times has been a loner. But she is very intelligent. Noomi understood that when one has survived a long time, so will also be strong, but she will also be fragile, for the wounded child in her has not developed properly. She is full of hope, a dreamer who is a little naive. However in the middle of the movie is a lot of things and she transforms into a warrior, another side of her awakening to life

b) Meeting Ridley in LA
Noomi, in August, 2010 was in LA for three, four or five days, and she came in for a group of meetings with Ridley Scott. She went into his office, as far as she was concerned, she was meeting with the producer, Michael Costigan and then five minutes before the interview, she was informed that Ridley was coming along as well and she was shocked. Normally Noomi wore black but that day she wore a pale Helmut Lang blue dress to look more feminine and nice but suddenly began to sweat and it could be seen in her dress and it embarrassed her.

Then he came in, she froze in awe of him, it was as if Ridley told her the words "You don't have to prove anything. You don't even have to audition for me. You have done everything already. I've seen your performances. I want you." Already he had seen The Girl With The Dragon Tattoo three times,  he loved her work and so he wanted to work with her.
They talked about a couple of different scripts that Ridley was thinking about making. He told her about his prequel script for Alien but didn't tell her that he wanted her for a role in that movie.

But he thought that she had to do something about her accent, and if she could work on that, you could be the biggest if that was her goal, but she had to work on that and be completely free, if she only worked with a dialogue coach and did the lines perfect, she couldn't really live then, she couldn't improvise.

The language barrier was an issue with her. When Girl With The Dragon Tattoo came out in Sweden, there were a lot of journalists from all over Europe coming to Sweden and she found it horrible to sit in front of all the people, like being a monkey in a zoo and she couldn't express herself.

The meeting went on for an hour. For her it was almost as if everything else disappeared around her, she forgot the world around her, she forgot that she was in LA. She thought it was completely unreal. She found Ridley to be very funny and down to Earth considering he was one of the world's biggest film makers. She was happy enough that she had that hour to talk to him even if she never got to work with him

After meeting Ridley, she took this situation serious, she watched movies without reading subtitles, she read books and newspapers,  and she worked on getting her head around the accent.

She was starting to film Sherlock perhaps several weeks later in London, and Ridley approached her again, he said to her that she wanted her to play the lead in his next movie which would be the Alien prequel and she was very shocked

c) The role of Elizabeth Shaw
Noomi played the role of Elizabeth Shaw,  who is a researcher and archaeologist. She is English but grew up in Africa because her father was a missionary, and from him she inherited a faith in God and a strong sense of inner self with an inner light. She is very stubborn and determined. Perhaps as far as Noomi was concerned, she was the most whole character she had played. And so she lost her parents when she was a child, and from early times had been alone.

She is strong but fragile because the wounded child in her had not developed naturally. She is full of hope and is slightly naive. However in the middle of the movie , a lot of things happen that transform her into a warrior, and another side of her wakes up to life

She and with Dr Holloway played by Logan Marshall-Green were the two main leaders and were a couple. They were the ones that convinced people to put money into this expedition to make this happen. Her character was the believer, the one with passion who was driven on the quest. They had been on a journey around the world collecting pieces that would make them realise that they had proof of an extra-terrestrial civilisation and they could go on an expedition to find them. She was the boss and together they are in charge. The rest of the team are hand-picked because as far as Noomi understood about these character, they're supposed to be the best in the world

d) Further Understanding
Noomi understood that there was a form of kinship with the character Ellen Ripley. She saw Alien as a teenager and was completely blown away, she felt that Ridley Scott has awakened dreams and hopes of many through Alien and Thelma and Louise

e) Resemblance to an Enki Bilal Illustration?
Enki Bilal the comic book artist had been one of the major talents along with Moebius of the early Heavy Metal comic books that captured Ridley's interest. Bilal's work has been an influence on the shadowy look of Blade Runner. When I watched Noomi Rapace in the movie The Girl With A Dragon Tattoo, she reminded me a little of the type of faces drawn by Enki Bilal, and later it turned out that Ridley had become very interested in her for a role in a film that was to be a prequel to Alien and was soon to become a film called Prometheus. So I ask the question is the fact that Noomi resembles a sort of woman drawn by Bilal, if this was one of the contributing factors for Ridley Scott taking an interest in her for the film role.