a) See: Boarding Prometheus
b) See: Working with Ridley Scott
c) See: Revealing the Engineers
d) See: Exploring the derelict mystery
e) See: Inspired by tales of the Nephilim
f) See: Jesus Christ, Emissary From Outer Space?
g) The Illuminatus
On Twitter he promotes himself as Screenwriter (Prometheus, Passengers). Photographer. Illuminatus.
What exactly an Illuminatus is supposed to be is not exactly known other than the Latin for "enlightened", although the word is featured in the name of the book The Illuminatus Trilogy.
With Alex Jones the conspiracy theorist claiming that Prometheus is a product of the Illuminati, a secret organisation that is keen to bring something known as the New World Order to the planet, it seems slightly unsettling as if Spaihts is only happy to have Prometheus set ablaze with conspiracy discussion.
(See: Alex Jones and Prometheus ) 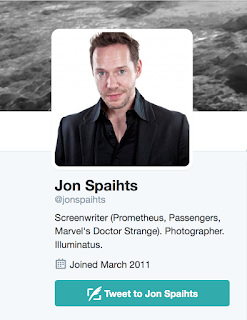