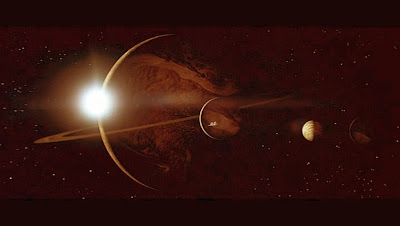 a.i) Boondocks.
Looking for a way to build an idea about how the galactic geography is formed in the film.

We have very a small amount of information to play with.

In the movie we have Parker's statement "We're way out in the boondocks here" .

A June 1978 version of the script along with the soft copy had Lambert making the comment and this held all the way to revisions through to October 4th 1978.

This as a generalisation suggests a remote area in the galactic area where they travel.

a.ii) A mention of Zeta II Reticuli
Dan O'Bannon introduced the Zeta II Reticuli into his early Alien script, and despite its ommission from various versions of the script such as the Alien Script with Cylinder, it's reintroduced in the various 1978 rewrites and revisions that lead up to the final filmed version movie.
One could imagine that David Giler and Walter Hill didn't really want to include it.

Broussard, the navigator from Dan O'Bannon's script who later is renamed Lambert mentions that the Nostromo is "Just short of Zeta II Reticuli, not even reached the outer rim yet"

Zeta II Reticuli was known at the time to be 37 light years from Earth.

Some might say because of what's said in the movie that the Nostromo has almost reached Zeta II Reticuli and the Outer Rim is closer to Earth than the named star system.

So is the Outer Rim before or after Zeta II Reticuli?


a.iii) Half way to Earth
Dallas tells the rest of the crew that they are only "half way to Earth" and this is introduced in the script in the June 27th 1978 revision.

a.iv) Getting back on course
In the film,  the character Lambert said "based on the time spent getting to and from the planet and the speed and which it's moving away from the other"

In the Alien Script with Cylinder (which features a concrete tower in place of an egg silo,) Dallas tells Lambert to set their course and get them into Light Speed Plus Four, sending their spaceship into hyperspace for their journey home.
The crew didn't appear to be that interested in how long it would take to get home in terms of how the visit to the planetoid interrupted their journey.

Perhaps they had an attitude to time similar to space travelers in Joe Haldeman's science fiction novel "The Forever War" in terms of space journeys resulting in centuries elapsing and so nearly a year in space that the final Nostromo crew would have been concerned about, would mean almost nothing.

a.v) Six months to get home?
In one instance Ash the android reveals though that it would take six month to get home.
a.vi) Distance from the Frontier
In the Early Alien Script by Dan O'Bannon with Roby (to be later renamed Ripley) as the survivor,  perhaps the planetoid might as well be 250 lightyears away from Earth.

In later rewrites, after what's known as the Alien script with cylinder, the period of time to get to the frontier bcomes five weeks and then six weeks.

What the frontier might have been is another question, perhaps the outer rim.
a.vii) Space Lanes
In a version of the Final Screenplay June 1978 ( found at https://www.avpgalaxy.net/downloads/) there is discussion about space lanes out in the galaxy.
The planetoid where the transmission emanates from is in a non-commercial lane.

When the remaining crew are discussing abandoning the Nostromo and using the shuttlecraft, a lane where they stood a remote chance of being picked up was a six week journey away.
Since it gets a mention, might Zeta II Reticuli be an ideal place in the depths of space connecting with such space lanes or even just a navigation beacon.

b) Visual references
b. i)  Map of the star systems
As they attempt to find the position of the Nostromo, the computer begins to show charts of the Southern sky, and we see as blurs the names of the star systems Carina, Volans and Chamaeleon drifting past the screen.

Possibly because the lettering is curved, it's likely that they've used a popular southern planisphere from the 1970s as a basis for the star charts here and perhaps added other background elements.

(Presently I assume that it must be the Philip's Planisphere (latitude 35 South) available in shops since they have also made use of Philip's Chart of the Stars in the production).
b.ii) Lambert's navigation chart
Lambert looks at the navigation screen on the computer trying to work out where the Nostromo is.
There are various letters and numbers scattered around the map , and who know what any meaning given to them might be, apart from SOL which is a name we give to our solar system
Is this chart supposed to mean anything?
Are the lines that make up the grid to be taken as seen from above or below?
Was the map supposed to be seen in the way we look an Escher drawings with no specific dimensions to make head or tale of in an Earthly sense?
b.ii) A place that we know called SOL
A dashed line leading to SOL from the upper horizontal line a space lanes.
Is it somewhere lightyears beneath the far horizontal lane? 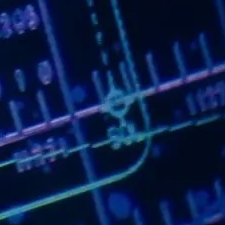 b. iii)  M7117 (or N7117) as the Nostromo?
M7117 is a point on top of a vertical line connecting with a horizontal space lane lower down in the image
I start to wonder if M7117 is the position of the Nostromo
I don't know what the numbers and letters should mean but in some of the other displays, I do know that the animators were interested in making sure that their personal signatures found their way into the image since it was unlikely that they would get a personal screen credit.
From a point marked possibly as M7117 (or N7117) , a curved line stretching across the SOL perhaps measures a angle of diagonal reaching between the far and near horizontal lines with the curve reaching to the direction of SOL, the angle measured is 106 degrees, just as Lambert mentions that they're short of Zeta II Reticuli.

Nearby below to the right there is another set of barely readable numbers is it perhaps 4701. Is that a nearby star 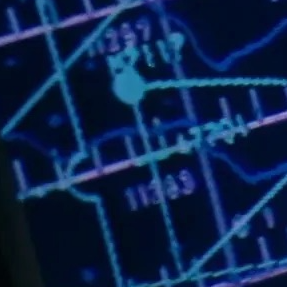 b.ii) 8 L02 MR0  ?
Two lines cross in the map with some letters and numbers that are barely legible.
I might wonder if it reads 8L02 MR0, or something similar. 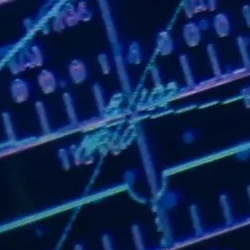 b.iii)  Where is Zeta II Reticuli?
So we have two interesting markers that might read 4701 and 8L02 MR0?
Since Zeta II Reticuli was a well known star at the time of the Alien production because of the Betty Hill starmap and I would think was star that had been explored.
I might wonder if it had been represented on the map in some way and perhaps I would would personally like to imagine it might be a cross roads for space lanes for these space vessels tramping through the galaxy

c. i)  Ron Cobb's point of view
Ron Cobb the concept designer knew much about O'Bannon's concepts in his script and as far as he knew, the film took place in an uncharted or unknown part of the galaxy

In reference to his early concept painting of a planetoid which showed the surface as seen from above covered in cloud with its two stars in the background, he went to say as far to say that he wanted it to be a planet that was part of a double star system with a white dwarf and a red giant in the background 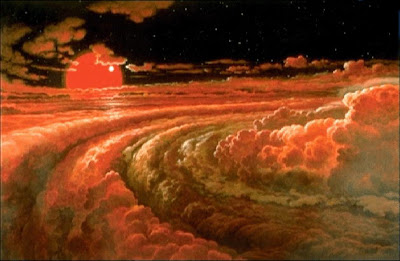 c. ii) Dennis Lowe's point of view
Dennis Lowe, who painted the scene with the planets had no idea that the star system was supposed to be part of a binary star system when he came to paint the rouge planet surrounded by it's moons was lit by its star (Alienexperience.com)