a) Fifield found transformed
When Fifield in his transformed state returns to the Prometheus, he is found with his legs hideously bent over over his shoulders. My initial thought was that this was a play with the idea of what the organic box Alien scene that Dan O'Bannon mentioned had been filmed and cut out, but Walter Simonson had seen it in a rough cut and so included it in Alien: The Illustrated story. Ridley's original storyboard simply states that he is crouching and had the idea of the character possibly being in a pit and dressed in other body parts. With his lower body in a put, they draped dummy legs over his shoulders.


b) Differences from Fifield
The alien as a box is a little bit different from what is happening to Fifield, his whole body appears to be bent backwards below ground level in a way that isn't human, and the upper legs are bent backwards as well. So what Walter Simonson saw in the alien folded up into an organic box seat appears to have the same sort of impact to tell us that there's something not quite humanoid about the body of this vaguely humanoid (See organic box like thing)


c) Froudian curiosity
The idea seemed to be very much carried over from an idea from Ridley Scott's Tristan And Iseult where a goblin labeled as a "Froudian" after Brian Froud is seen crouching curled up with its knees over its shoulders. (See also Origins of Ridley's compacted alien idea?) 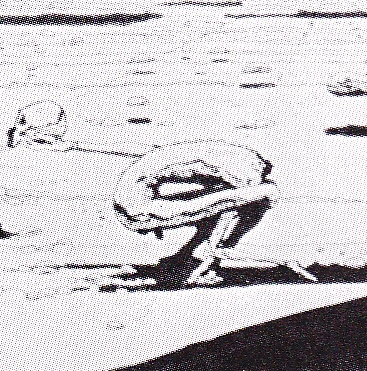