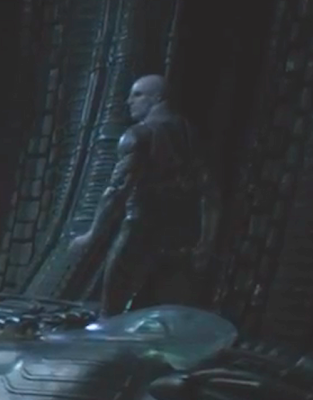 Empire magazine published a set report in their May 2012 issue and on p65 talk about the Space Jockey as it has been revealed to them: "And then lying  on the floor of a set that seems to be some sort of operating room we find the elephantine in the room. This is the space jockey. Or to be more precise, the disembodied head of the space jockey, ready for its close up, Mr Scott. Or to be more precise still, it's not a head at all but a helmet: a breathing apparatus designed to help our friend cope with hostile atmospheres. For - and this is the first surprise, the first sign that Prometheus has more up it's sleeve than toothy terrors picking  off people one by one - that Merrick like mask merely conceals the true face of the Space Jockey. Helpfully that face is also on set, awaiting a spot of prosthetics jiggery pokery, and it takes Empire's breath away. Whatever we were expecting the Space Jockey to be, it's fair to say we weren't expecting it to be a grey/blue skinned creature, about nine feet tall, its sneering face marked with scars. Its humanoid face. It's face that looks just like one of us. Its face that perhaps prompts as many questions as it does answers and chief amongst them is the biggest one of all. The one with which Prometheus is really preoccupied"


However by then the image of the tall bald man in a biomechanic outfit had already been seen and caused mixed views about the whole thing after many hoped that what we had seen of the space jockey creature in the first Alien movie was actually once a living alien entity rather than a tall bald entity that seemed recognisably human soon to be introduced to us as one of The Engineers.