Evolution of Lovecraft's Elder
Things/ Old ones via the Henu Barque

leading from
The Henu Barque trail through the 20th century.
and
HP Lovecraft's illustrations
and

Henu Barque at the Egyptian Theatre 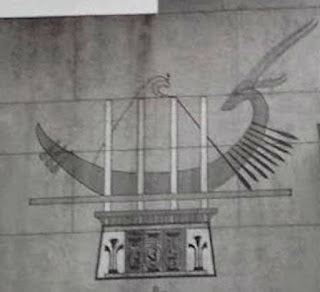 a) The Henu Barque image appeared on an outside wall of the Grauman's Egyptian Theatre in Holllywood as it was back in 1922. It was a curious thing to find on a wall in Hollywood and perhaps because of its further simplified depiction at the Egyptian Theatre and the fact that this thing only existed in other people's reliefs and illustrations from over the millenias, it let people's imagination run.


b) Almost a decade later in 1931, HP Lovecraft was sketching out a visual idea for the Old One/ Elder Thing, in a page full of notes for "At The Mountains of Madness" and it first of all began resembled a sort of a curious lobster with a fan of legs or tendrils. Strangely it can be seen to resemble the Henu Barque at the Egyptian Theatre.

c) Comparing it to the Henu Barque at the Egyptian Theatre, it looks as if the front of the head has been turned around while the ears and horns into eye stalks on the beast and the fan along the neck had been transformed into a fan made from tendrils 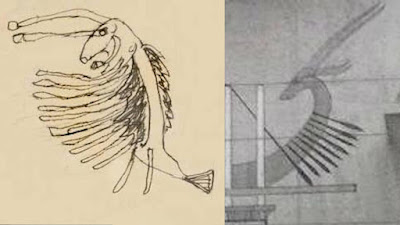 d) He would cross out the drawing of this creature and redraw it as if it was a creature had the same five fold symmetry as a sea urchin, with its body curiously made up from five segments radiating from the centre. and he would incorporate elements from his other sketch multiplied by five.


e) HPLovecraft's description of the Old One from At The Mountains Of Madness  taking it further beyond the final sketch.

"Objects are eight feet long all over. Six-foot, five-ridged barrel torso three and five-tenths feet central diameter, one foot end diameters. Dark gray, flexible, and infinitely tough. Seven-foot membranous wings of same color, found folded, spread out of furrows between ridges. Wing framework tubular or glandular, of lighter gray, with orifices at wing tips. Spread wings have serrated edge. Around equator, one at central apex of each of the five vertical, stave-like ridges are five systems of light gray flexible arms or tentacles found tightly folded to torso but expansible to maximum length of over three feet. Like arms of primitive crinoid. Single stalks three inches diameter branch after six inches into five substalks, each of which branches after eight inches into small, tapering tentacles or tendrils, giving each stalk a total of twenty-five tentacles.
"At top of torso blunt, bulbous neck of lighter gray, with gill-like suggestions, holds yellowish five-pointed starfish-shaped apparent head covered with three-inch wiry cilia of various prismatic colors. Head thick and puffy, about two feet point to point, with three-inch flexible yellowish tubes projecting from each point. Slit in exact center of top probably breathing aperture. At end of each tube is spherical expansion where yellowish membrane rolls back on handling to reveal glassy, red-irised globe, evidently an eye. Five slightly longer reddish tubes start from inner angles of starfish-shaped head and end in saclike swellings of same color which, upon pressure, open to bell-shaped orifices two inches maximum diameter and lined with sharp, white tooth like projections - probably mouths. All these tubes, cilia, and points of starfish head, found folded tightly down; tubes and points clinging to bulbous neck and torso. Flexibility surprising despite vast toughness.

"At bottom of torso, rough but dissimilarly functioning counterparts of head arrangements exist. Bulbous light-gray pseudo-neck, without gill suggestions, holds greenish five-pointed starfish arrangement. Tough, muscular arms four feet long and tapering from seven inches diameter at base to about two and five-tenths at point. To each point is attached small end of a greenish five-veined membranous triangle eight inches long and six wide at farther end. This is the paddle, fin, or pseudofoot which has made prints in rocks from a thousand million to fifty or sixty million years old. From inner angles of starfish-arrangement project two-foot reddish tubes tapering from three inches diameter at base to one at tip. Orifices at tips. All these parts infinitely tough and leathery, but extremely flexible. Four-foot arms with paddles undoubtedly used for locomotion of some sort, marine or otherwise. When moved, display suggestions of exaggerated muscularity. As found, all these projections tightly folded over pseudoneck and end of torso, corresponding to projections at other end."
Posted by wmmvrrvrrmm