a) Realisation
On 15th April 2017, I've just seen the special cover for the forthcoming Empire Magazine (June 2017) that features a piece of artwork featuring the Alien, by an artist named Jacey.

This time it looks as if the artist has slightly made use of my realisation from last year around the time of Tomita's death that HR Giger's Alien Monster IV was partially based on the relief on the cover of Tomita's record album "Pictures At An Exhibition".


b) Of course it's a huge suspicion and if I'm correct, then I'm happy that artists are making use of my findings that aim to be correct about what Giger was doing.

Perhaps the alien on the cover of the magazine looks a bit like a pygmy or a man in a thick heavy costume, but the image is a lot of fun. 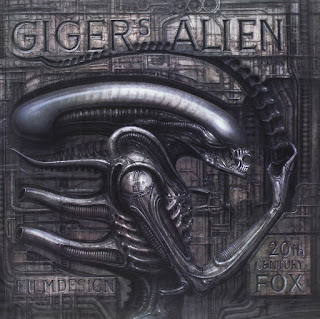 c)  Tomita's Pictures At An Exhibition
An obvious starting point would be the cover of Giger's Alien but the need would be to explore the possibility of doing something slightly different. Perhaps the illustrator might even be a fan of Giger's work.

A biggest clue to pursue is the little vertical bar with ribbing at the bottom that's highlighted on the magazine cover and there I would think how it seems derived from the spine of the head on the Tomita album cover, which shows up as an indentation in the floor of the environment in the Giger painting.

This magazine cover artist has generally layed the floor out as a flat image as with the cover of the Giger's Alien. 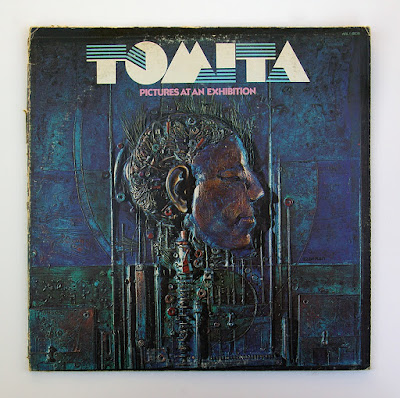 d)  By way of  Giger's Alien Monster IV
With that, the alien monster in Giger's painting featured below gives a slight impression of a vortex which the artist seems to have gone with in a different direction, and ideas for this aspect could have been sucked in from various pieces of artwork by various artists keen on Giger's monster.


e) Further along the Tomita connection
Another possibility I'll look at is that the artist went further with the Tomita connection, perhaps charmed by the idea that there was one with Giger's work, and made the tail of the alien beast as a spiral, considering Giger's work 404 with its three tentacled spiraling form, which I worked out referenced the album cover for Tomita's Snowflakes Are Dancing, and one might want to consider the Alien 3 poster with its spiralling form of a Alien Queen fetus.

What there is to consider is by now we've been force fed the idea of an Alien as a spiraling form over the decades with many illustrators feeding off the work of at least dozens of other artists who want to communicate the same abstract thing.

Perhaps as much can be said about many of the comparisons I'm making in this article, since we are so over exposed to many people's drawings and paintings on the internet.

It's perhaps a world with slightly fuzzy definition.

This circle with spokes in the Empire Magazine cover also appears to echo Giger work.

While I have said that the vertical pipe at the bottom of the Empire appears to reference the spinal tube in the Tomita album cover, here it also equates with the barrel of the gun like tube at the bottom of Giger's Baphomet painting.

With that we see in the Empire, a circle with spokes which shows itself to echo of the circle with syringes, presented as this strange rail wagon in Baphomet.


The upper set of wheels in the painting becoming the space for the Empire name.

However there is very little or perhaps nothing at all left of residual signs of the woman or the Baphomet head to be encountered in the Empire cover. 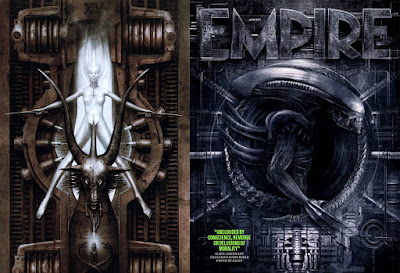