Alien: Issue No.8 of Weird Science
inspires the chestburster

Leading from
Alien: Birthing the Chestburster

a) Dan O'Bannon in his easy something perfectly disgusting outline some of the main sources of inspiration for his script for Alien and one such thing was EC's comic book Weird Science, and specifically he described a story that featured in issue No.8 of Weird Science published in 1951 a story called "Seeds of Jupiter" illustrated by Al Feldstein.

b) On the deck of an aircraft carrier, a ball falls out of the sky and breaks open revealed a cluster of smaller nuts. A sailor nicknamed "Peachpit" because he loves to suck peachpits is offered one of these nuts by the other sailors who claim that it's from a Mongolian peach, he accidently swallows it after one of the other sailors slaps him on the back, he suddenly doubles up due to terrible stomach pains and is soon so ill, his skin dries up, his face turns blue, his stomach swells up and on the operating table he soon turns black and dies. The surgeon cuts open his stomach with a scalpel, from the slit in the stomach a green tentacled creature crawls out, off the operating table and over the side of the ship into the sea, and soon grows to a colossal size threatening to destroy Manhatten. The nut like stones turn out to be alien creatures in an inanimate dehydrated form and once dried out return to the form of one of the nut like stones.

c) The following below are a selection of panels from the comic book story. But for the whole story see The-whole story from issue no8 of Weird Science 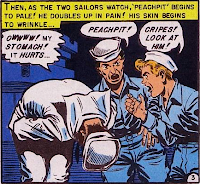 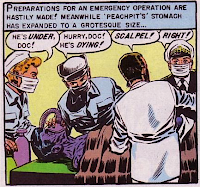 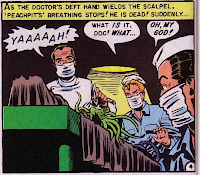 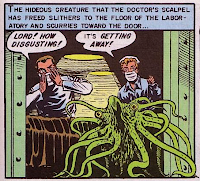 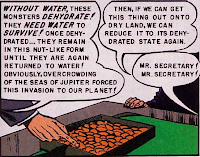 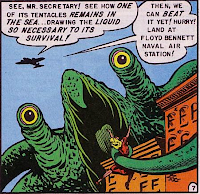