Leading from:
Prometheus: Comic Book Inspiration
and
Aliens in the comics 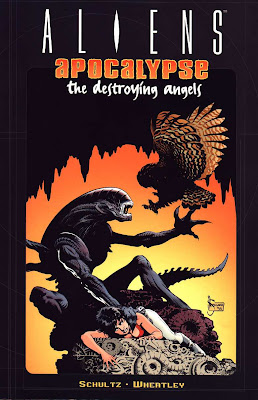 a)  Creation of Alien Apocalypse: The Destroying Angels
In 1999, about dozen years before Prometheus came out, a comic book series called Alien Apocalypse: The Destroying Angels was published, taking place around 20 years after the events of Alien exploring the mystery of the derelict and its pilot the space jockey and its cargo of alien spores.
The comic book series was a very thoughtful in the way that it roughly exploring some of Ridley Scott's ideas for a sequel for Alien involving archeology although it ignored the idea that Ridley had about that the alien was being carried around by the space jockey's ship as a bioweapon since in the Dark Horse Alien mythos, this wasn't a direction they were exploring but it explored the suggestion that the alien life form had been to earth before.
What also made the comic book story interesting  is that the artists showed a genuine interest in exploring Giger's biomechanic architectural designs.

b) In the story, another derelict ship is discovered, one inspired by one of Giger's unused sketches for the derelict space ship.


c) Star Chart
A star chart found aboard a derelict alien spacecraft leads the explorers to the homeworld of the space jockeys where they encounter a vast underground city. The space jockeys were a race that had colonized perhaps thousands of worlds. 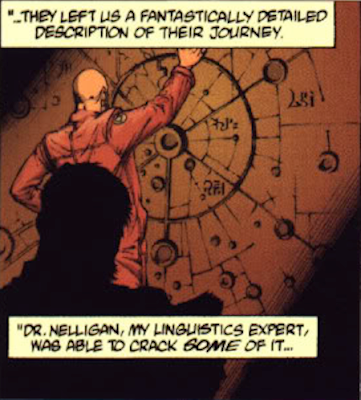 d)  Mysteries of the alien life form
However the Alien life form turned out to be something that had been destroying life through the universe, and had been found to have destroyed all life on Earth 3.2 billion years ago and cut the population of the space jockeys back.
It was perceived as a life form that somehow restored the balance when space explorers intent on colonisation had over stepped the limit.

e) Discovery of a still living Space Jockey
In the underground city,  a carefully sealed chamber is found where giants were subjected to some form of "catatonic suspension".
On the verge of being exterminated by the Aliens on the planet, the giants resorted to an attempt to hibernate and outlast the alien life forms.
However only one was able to survive the three billion years. 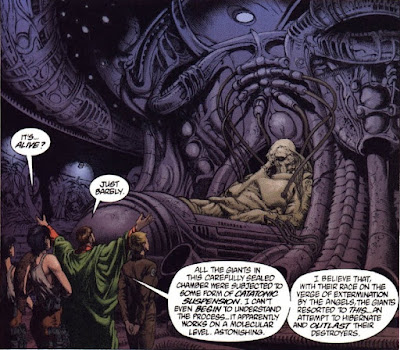 f)  Representation of the space jockey
The Space Jockey in this story appeared to be an elephantine headed humanoid creature with a thick scaly hide and the long pipe running down the front of its chest ran beneath the skin and a thick ribbed slug like lower body.
There was no attempt to define how this space Jockey's body was exactly structured.
Many images in the comic book showed the dead partial remains of many with the lower part disappearing into the architecture 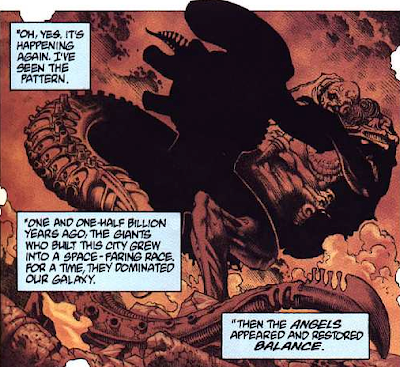 g)  What does the alien look like thay is birthed from a Space Jockey?
An alien spore was placed by a human upon the sleeping Space jockey to  see what happens when an alien gestates within the Space jockey, and it results in one of gargantuan proportions. 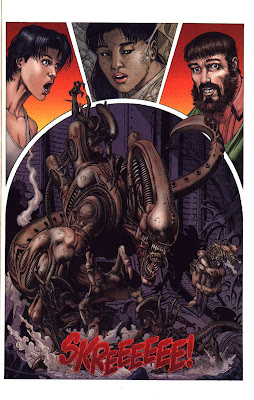