a) Knowledge of the Alien
Gareth who directed Monsters in 2010, also directed the 2014 version of Godzilla and then the Star Wars film Rogu Own released in 2016, he considered Giger's alien to be one of his top three movie monsters recognising it as something unique and a big step forwards in terms of creature design and was another person saddened by the new of Giger's death on the day it was announced. In terms of the films themselves, he wasn't entirely sure whether he liked Alien or it's sequel Aliens the best. 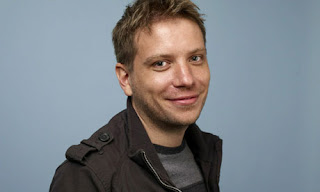 b) Muto
His Godzilla movie would be full of references to Giger's work, and so Giger's alien design would be one of the influence on his monster Muto that would be Godzilla's adversary for the film. His intention wasn't to make it definitely reminiscent of Giger's creature but because it was part of the path of exploration, he found that it way into the final design along with the other inspirational creatures, such as King Kong, Jaws, the tyrannosaurus rex, the giant insects from Starship Trooper. However on at least one occasion he decided to say it was the Alien Queen rather than Giger's Alien


c) The Eadu landscape
When he made Rogue One (2016), he included a planet in that was very much inspired by the mysterious unnamed planetoid in Alien.