There are numerous photos of the room to be found and very slowly they begin to add up into a room in with dimensions that can be guessed.

It has various low shelves against the wall, and tables that can be pulled around.

It is lit by long fluorescent light bulbs across the ceiling.

Once Ridley Scott had told Dan to go ahead with designing the Facehugger, Dan went over to the art department with Roger Dicken, they took a drafting table and a huge piece of paper with some pencils. Ron who inhabited the room while doing his drawing work for the film would sketch out a skeletal understructure (see The Facehugger)


b) Room dominated the Hieroglyphics painting
Later in August 1978, after various disgreements about the quality of work from Giger and the blame being put on Giger by Clinton Cavers for the fact that the Alien had not been finished, H R Giger had been moved away to a new studio to work in, the Art Department.

At first he had no interest in this new place for him at all but Mia set it up beautifully diminishing his frustration by half.

A room which Giger uses with a wall that is painted white, against the wall in the back, there is Giger's Hieroglyphics painting.

On the wall next to it but separated by a small case of shelfs is a painting that might well be a study for part of the alien's body, and he is painting the derelict ship tail fin, while sitting on a chair with pale material.

The windows have been covered over that would be found next to the shelves on the right. 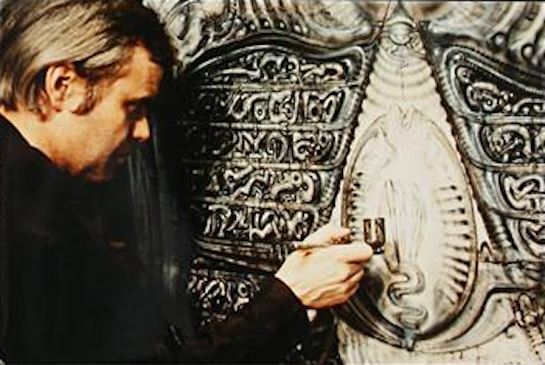 c) Other uses
He also uses this room to paint the alien eggs and later the "Brett egg" would be photographed within the chamber against a photograph of the planetoid landscape altered with the airbrush by Giger. The Alien costume