leading from
The Tomita Planets 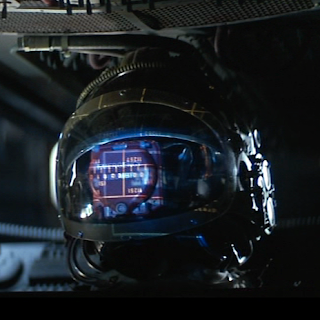 Ridley had the flight helmets on clips on the back of the seat so when the crew required them for certain conditions, they'll put the helmets on just as with flying a helicopter. Ridley didn't want to do the whole of the first act with people wearing helmet and it got to the point where he was to be asked about the need for these objects

So he was asked "Well, why the helmets then?"

Ridley's answer was "Well if you’re in rough conditions, ok? "

Listen to Mars Bringer of War on Youtube
Source Quotes

b) Helping Sigourney with music
Ridley was working with Sigourney Weaver filming the sequence in Alien where she rushes around the corridors of the Nostromo that's on the verge of self destruction and soon comes face to face with the Alien beast and he thought to himself "whatever I can do right now, she's on her own",

Since Ridley loved Tomita's Planets album which he was playing in the editing room as a temp score and he loved Mars Bringer Of War, he wanted to use it to help Sigourney with her performance in the end sequence where Ridley said to Sigourney "Do you want some assistance?"

"Well" Ridley added "listen to this, I've been playing Tomita in the editing room as a temp track, er temp score"

Sigourney replied "Absolutely, anything like that would be brilliant"

Ridley then said "Look, I can organize half a dozen fifteen inch speakers down the side of the set and I've got this great piece of music which you may find extremely useful, 'cause not only does it sound like engines. It is extremely threatening and ominous."


And Sigourney Replied "Anything like that, what is it? let me hear it"