Alien: Industrial conglomerates
and their ships

Leading from
Alien: Making the Movie

The armada would in turn be one of several owned by multi-national industrial conglomerates who had been mining and exploiting space for decades.

Ridley imagined that fifty years into the future, the world had been converted into the property of two or three large conglomerates, whose sources of energy are provided by the exploitations of deposits in space.

The Super-cargo spaceships that link Earth and the planets would transport enormous loads of minerals - gas, oil and the like.


The refinery itself is a conglomerative mountain of technology.

A picker craft would put all the stuff aboard and the refinery would perhaps slowly crush the contents or simply turn it into liquid or gas for easier transference back to Earth.

They certainly didn't design the Nostromo to look like a hotel but at the culmination of many long voyages, each covering many years, the ships look used, beat-up, covered in graffiti and uncomfortable.

When Ridley was in and out of London, he would notice whether it was looking tidy or untidy driving himself crazy and he then applied this rule to Alien.

He had been flying to and from the United States a lot of that time and he noticed how Boeing 747s were gradually getting beaten up.

When he was in the lavatory aboard the plane, he would notice that even there someone had done some graffiti.

Along side that were instructions on the use of the lavatory in four different languages.

He applied all of this thinking and projected it ahead near enough a hundred years, although he felt he probably could have gone further with it in the film.

Ships could be so vast that different companies would have actually built different parts of them giving them the look of something rather hybrid. (See "Combination ship" in Creating the Nostromo: The Crunch)

In a tongue in cheek fantasy way,  Ridley was imagining a not too distant future in which flying in space looked like taking an aircraft flight,

There are many vehicles tramping around the universe on mining expeditions, erecting military installations and so on, but the reality of this would seem unlikely for perhaps a thousand years.

The Nostromo itself was the size of something like the Queen Mary ocean liner, it would have had corridors two to three hundred feet long, and would be comparable to the Japanese super tankers three quarters of a mile long.

The refinery would have been perhaps a square mile.

The Nostromo had to be able to fly both in space and under atmospheric conditions.

Ridley saw it as a gigantic maneuverable jump jet and therefore it was able to get wherever it wanted on various planets, landing in quite narrow, rocky terrain.

Thus was only near enough streamlined object in the whole of the lander and refinery construct.


b) Computerised ship and its crew
By this time, possibly the value of human life has diminished considerably, and in view of the Big Brother idea of a lifeless megastructure which becomes more prevalent.

The machinery, the information data and cargo are of more importance to the corporations that the individuals on the ship. Its employees are now considered expendable.

Ridley used the word "workies" to describe them and the idea was that nobody in their right minds would do what they're doing unless they're going to get set up for life by doing it.

It would be like signing onto an oil tanker for eight years, and so these jobs which took them on several year journeys through space were to them normal state of affairs.

For the sake of efficiency, for the duration of the actual journey, the computer run the ships while the humans remain in a state of hypersleep.

In this case, the Nostromo is driven by a computer called Mother, and as far as running the ship goes, the crew is secondary.

Once on the ship, their function is minimal.

The idea is that they need know only how to work the ship's basic equipment, and that equipment can start itself, repair itself, think for itself and act as its own monitoring system.

However in the Alien movie, two men, Brett and Parker are physically involved in the repair of the ship in order to make it ready to take off again from the planetoid.

c) Weylan-Yutani
c. i) Weylan-Yutani, an industrial conglomerate, is based in Honolulu and is Japanese owned which is incidentally why the crew's spacesuits have something of the Samurai about them.

It would be comparable to a super-Sony, 50 times bigger than it was in the 1970s.

Back in the late 1970s when Alien was made, the idea of mega corporations seemed like exotic speculation  ( the idea was explored also in the form of Tyrel in Blade Runner released three years later) and by the 21st Century it became a reality.

Perhaps Alien took place a hundred years into the future from when it was made which would place it generally in the 2070s or perhaps it took place somewhere early in the 22nd century.

Ron Cobb might well have gone ahead and called the company Leyland-Toyota, it would have been to show that England was getting back on its feet and had united with the Japanese who have taken over the building of spaceships the same way they had by the late 1970s with cars and supertankers, but using those names would have invited trouble for the production. ( See Origins of Weylan-Yutani)

d) Red Star Lines
Ron Cobb came up with the idea as a patch for Red Star lines which he wrote as Red Star Line, (originally the name of transatlantic ocean liner transporting from Belgium to America and Canada from 1873 and 1934) and this is purchased in 2115 by the White Dwarf Complex and would be a company used to transport and rotate crews.

(One can think about how red stars in astronomical points of view are usually Red Giants that are giant aging stars in astronomy and White Dwarfs are the generally Earth sized burnt out cores of collapsed stars, so there there is the interplay there) 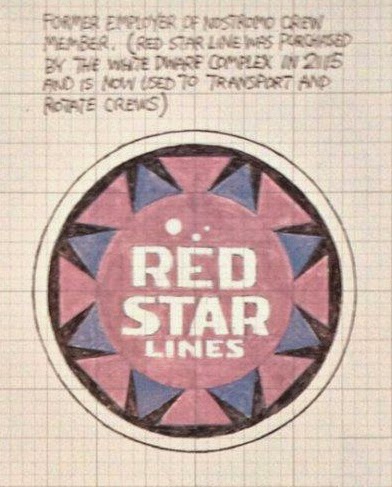 e) Farside: Lunar Mining - Lifting
Farside Lunar Mining would feature on a patch worn by one of the crew, and this badge showed a map connection such places as Icarus, Leibnitz, Mach and Kuliki.

Are these places on the dark side of the moon. Leibnitz so happens to be a city in Austria, while Kuliki can be found as the name of settlements in Poland and Russia? 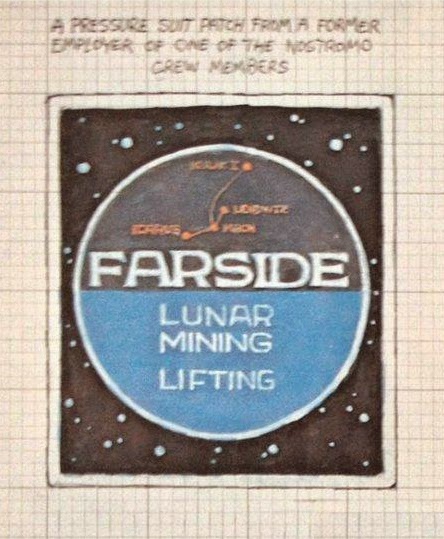 f) Third World Empire and The United Americas
Economics and diminishing resources have led to the political merging of cultures that seemed unlikely in the 1970s.

During the last quarter of the 21st century, UK joined forces with Japan and dozens of developing countries to form the Three World Empire.

A powerful economic bloc created by the Third World Empire help necessitate the merging of North and South America into one economic giant The United Americas, by 2104. 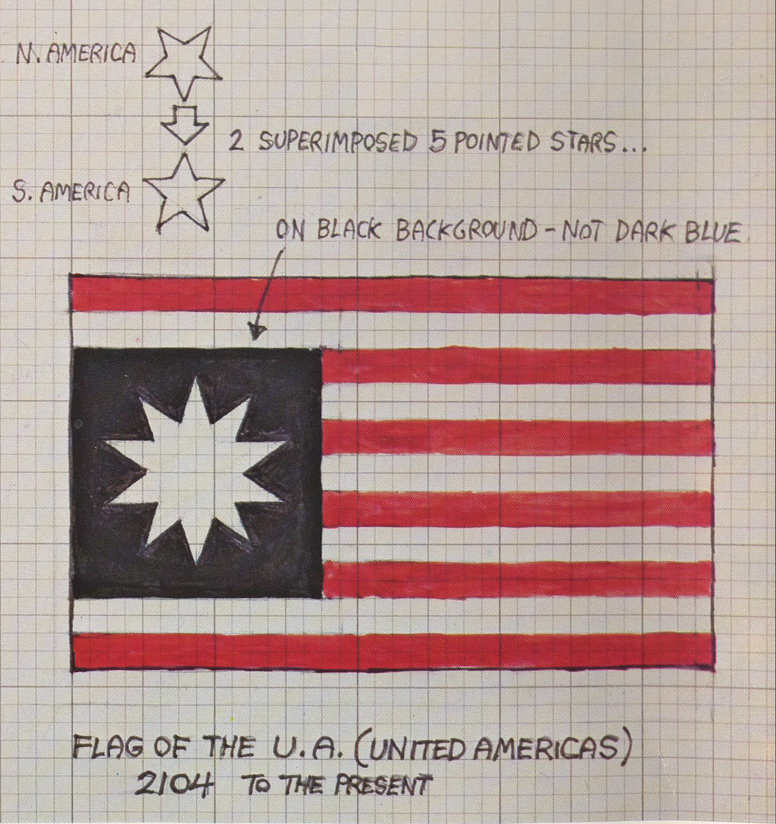 g) Earth Vicinity
The definition of Earth perhaps has extended out as an inner city of planets, in a tongue in cheek way, it would have been imagined that almost everyone from the planet either Black, Chicano or Oriental, while the caucasians have moved to the suburbs of Mars.

By 2087, "Earth Vicinity" space was an area extending 16.3 light years around planet Earth, encompassing 39 star systems, with 14 colonies on planets within the other start systems within that area.

Ron Cobb was still using the term after the movie. (see: Galactic geography of Alien) 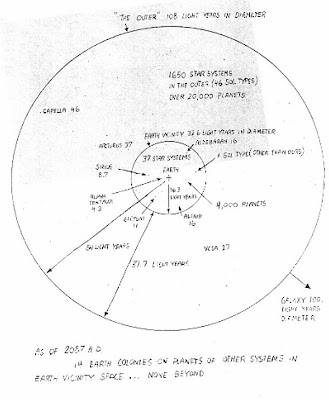 h) "The Outer" Rim
"The Outer" rim extended 54 light years from the Earth. Interplanetary commerce and the mining of deep space flourished, and from 2088 to 2102, The Third World Empire pioneer the establishment of settlements on Mars and Saturn's moon Titan. (see: Galactic geography of Alien)