leading from
HR Giger's art.
a) Saturday 18th of April, 2015: It looks to me like a world of people going about their business in day to day life in Giger's world of biomechanical beings that have transformed into more Lovecraftian monstrosities, long snouted entitied and shadowy humanoids, perhaps also drifting back and forth like a shoal of sea horses. Only several paintings earlier he was painting pictures with titles directly referencing Lovecraft (Lovecraft and his Pets, work 400 (1978), and Lovecraft's visit, work 401(1978). This would have been at the time when Mia Bonzanigo was his partner and often sitting with him as he painted. (Saturday 18th of April)

b) Potential sneezing gnomes
Every time I look at this picture at the bottom I think I see a bulbous headed gnome like being with a face that looks vague like HR Giger's and a piece of intestine coming down in front of his face becomes a handkerchief to sneeze into and either side of him are some other faces with streams of mucus ejecting from their nostrils. If they are there, then Giger painted them in and then buried them beneath the biomechanics. There appear to be a host of bloated goblins and other unnameable creatures coughing and sneezing away in such paintings as Mordor V (1975) and Mordor XII (1976) and there is the story that Mia Bonzanigo told about Giger having painted a picture of a gnome sneezing in the painting because he himself had a cold at the time (See Alien Makers VI)  (Saturday 18th of April)

c) Mutant thing with cuddly toy?
A strange beaked almost avian demonic thing with a beak and a curling tail holds in its arm perhaps a cuddly toy animal with eye patches of a panda. (Saturday 18th of April)

d) The Mask (1961)
On the 4th of December 2015, someone on Facebook talks about the movie The Mask from (1961) that's come out on DVD in 3-D, and the trailer for it features a wall of masks. The film has been perceived to be so clearly inspired by hallucinatory drug experiences, and contains very macabre and surrealistic imagery, and has also been compared to HP Lovecraft. In Giger's painting there is a remnant image of a skull like face with a large spiralling eye, and there skull face has suggestions of circuit patterns.  Perhaps this painting is a collection of masks. 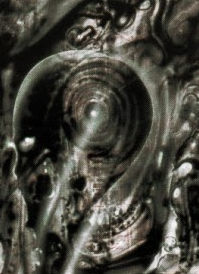 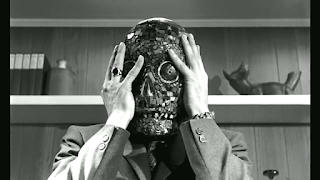 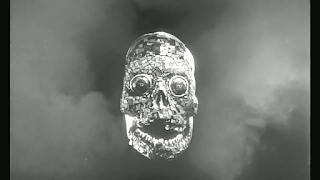 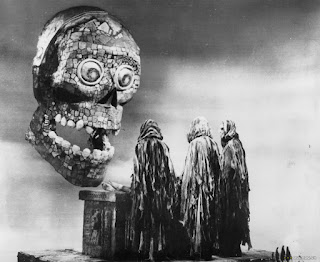 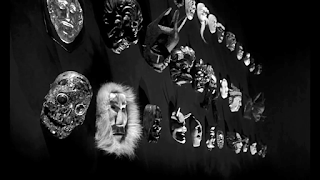 e) Jackson Pollock's Mural
On 16th February, 2016 I made the connection between Giger's New York City XVI from 1981 and Jackson Pollock's Pasiphae. Looking at Pollock's work, on 17th February 2016 I decided that Biomechanical Landscape from 1979 had enough the qualities of Pollock's "Mural" from 1943, in the way it seemed to be composed of interlinking seahorses. Pollock's painting represented an animal stamped with every different kind of animal that he could imagine: (see https://uima.uiowa.edu for more details of Pollock's painting) 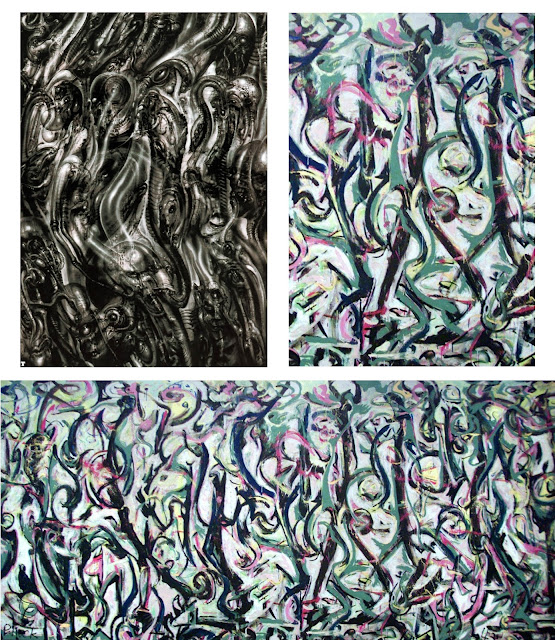