a) Thoughts on Prometheus
Joshi was aware of the controversy around Guillermo Del Toro not making At the Mountains of Madness because it seemed that it was likely that Ridley Scott's Prometheus would cover the same subject matter. From some perspectives it seemed that it did, in terms of Lovecraft's idea of a superior alien race that created all life on earth. Joshi found Prometheus to be completely unimpressive and a total failure. 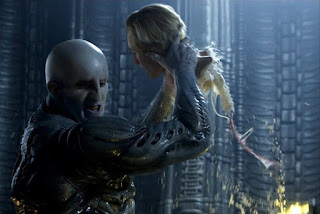 b) Hope for a Mountains of Madness movie
Meanwhile he was still thinking that  there was still a chance that Del Toro would be making his At The Mountains of Madness movie, and it would make a better movie than Prometheus, as long as he restrained himself to the extent that he did with Pan's Labyrinth, rather than make a movie in the manner of Hellboy. (See also: "del Toro's concerns about Prometheus" Guillermo del Toro talks about Alien