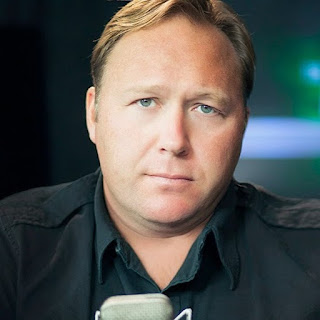 Alex Jones saw Alien when it first came out in 1979 and was actually a fan of the film back then and so was intrigued by the idea of Ridley Scott wanting to direct a sequel. He managed to get what seemed at first to be an early version of the Prometheus script and then turned out to be a synopsis of it from a source, and decided that what the story about was what the Illuminati were in to. It probably didn't help that the major plot points of a film were from a script written by a Jon Spaihts who on his Twitter page was a self proclaimed Illuminatus. (See: Jon Spaihts)

b) Into the Prometheus arena
Alex Jones stepped into the Prometheus Arena two months before it's release with a video making a statement that Prometheus reflected the beliefs of the Illuminati that he considered to be a mystery religion where people believed that they were genetically engineered by an extra-terrestrial civilisation and like their otherworldly predecessors these people also wanted to control the world with genetic engineering and he wanted to point out the the public on planet Earth are being generically engineered without being asked right now, and now the Illuminati coming out with thousands of variants in crops, in grasses, in trees, and they're GMO without asking anybody. So this is to get people who are totally locked in to popular culture to think about the real world.

c) Ancient alien discussion
While he would discuss this subject in terms of the ideas about extra-terrestrials, he would deny that he believed in this sort of thing himself. It wasn't specifically that he wanted to spew strange ideas about the reason for the movie being made but it was a way for him to communicate his own message about where humanity was going, although some might have been rather confused about his intentions.

In relation to the movie, he thought about Ezekiel with spinning wheels of fire landing and creatures with blue approaching Ezekiel and giving him a drug to take and then he has wild hallucinations.

He compared Prometheus to a 21st century spin on the beliefs of the Dogon tribes in Africa and the Aztecs of Mezo-America. He also acknowledged that Erich Von Däniken was the person wh more than any other living person popularised this idea in his Chariots of the Gods books showing that our planet had ben visited and manipulated by extraterrestrials for thousands of years. Oddly going by the artwork of HR Giger, it seems as if Giger had been busy putting his own futuristic spin on Nommo petroglyph images from Dogon Mythos and images from Mayan culture although his influence in Prometheus the movie's look had become slightly demoted but were still inspiration.

d) Views on Von Daniken
However Jones also decided that what Von Daniken was doing was regurgitating ideas developed by a ruling class on this planet, and noted that they were obsessed with the idea that extra-terrestrials were controlling the planet and giving man knowledge

f) A catalyst for LA Marzulli
Ancient Aliens theorist LA Marzulli would take heed of what Alex Jones was saying and have some words of his own to say about the movie (see: L A Marzulli on Prometheus)