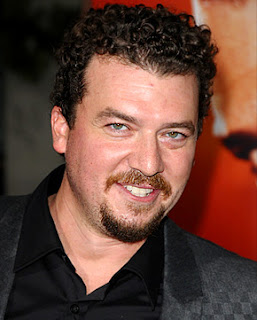 a) Experiences with Alien series
a.i) Watching Aliens
McBride was still a boy, attending Elementary School and it was in the years when there were video stores.
He would visit them with his parents, would always go for the R rated movies, and he would slide them in the last minute while his parents were checking out.
Then he would get up very early on Saturday morning before they were up, to watch them, and so he would do this with Aliens.
Then his mother would wake up early to make breakfast and so she is there able to hear what's going on the TV, "this is not going to fly" he thought.

a.ii) F-bombs in Alien
It got to a point where she said to him "what is this you're watching. If they curse one more time, this is going off. We're not going to sit and listen to this"

Then Bill Paxton came into the scene where the dropship crashes and he unleashes his epic monologue with the words "Game over, game over" and drops the F bomb near enough thirty times.
That meant that McBride had to shut the movie off, and he never saw what happened to Newt or Ripley for ten years after that

Despite this set back, he would become a great fan of the series with Alien and Aliens as his two favourite horror films while he was growing up as a child. 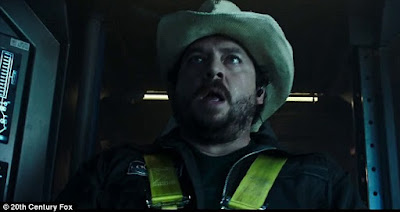 b.i) Ridley wants to me Danny
When the filming of Vice Principals wrapped at around the end of 2015, Danny McBride came back to LA and got a call telling him that Ridley Scott wanted to meet him,.
He had no idea what it was for, but he was a great fan of Ridley Scott's movies, and whatever Ridley had seen of his that he liked.
b.ii) Ridley had seen Pineapple Express
For sure Ridley had seen the 2008 film Pineapple Express because Seth Rogan who was a fellow actor in the film told McBride about how Ridley reached out to Rogan to tell him how much he enjoyed the film.
Inevitably it was the movie that McBride was the most well known for before then.
b.iii) Summoned by Ridley
Ridley asked Danny McBride to come to meet him and talk about a film role.
Danny didn't even know what movie it was for, he was so overwhelmed as it was to meet Ridley Scott.
As they met and first of all they talked as if they were "bullshitting".
Then half way through the conversation Ridley started to pull out these books and show Danny sketches of the spaceships and aliens.
Then it occurred to McBride what this was all about.
"Jesus, this fucking Alien, he's talking to me about Alien" he thought "why would he be interested in me in this, am I going to be serious, just like the comic relief for this."

But at the end of the interview, he wasn't offered the role of Alien, but it was just to talk about it.
He half wondered if Ridley wanted to test the material on him to see if it was "cool" or not.

b.iv) Receiving a script
McBride then got the script.
He assumed that he was being given a role for a wisecracking funny man.
The story started out under some dire situation and it got worse from there.
He found himself thinking, "This shit is dark, there is no comic relief in it at all, this is a dark horror movie."


c)  Taking the role
c.i) By February 2016, it was revealed that he was in early discussions to co-star in Ridley's Alien movie

He would play the pilot of the Spaceship Covenant, which is a colonisation ship, searching for a planet where they would start life anew, and he would run the ship
c.ii) Homage to Slim Pickens
He went to see Ridley to talk directly about the role.
Ridley informed him that the character was like an homage to the character actor Slim Pickens who played Major Kong in Doctor Strangelove.

c.iii) Brushing up on pilots and Dr Strangelove
Taking the role, he was excited to be able to step into something like that and participate in a way that's not relying on things that have to do with his usual work.

McBride 's response was to brush up on the Doctor Strangelove film and watch different films with pilots in, just to see things such as what buttons they pushed.
He would also study pilots to see how calm they stayed when they were working, and observing them, he realised that it didn't look as if his character was just flipping switches the whole time.
c.iv) Thinking about how characters from an earlier film would handle this
When he made the comedies series "Eastbound and Down" and "Vice Principals" , it was just a few degrees away from being a straight tragedy, and the preparation for Alien: Covenant was very similar because as an actor, he needed to just root it in reality.
c.v) Tone of the set
McBride had no idea what the tone of the set would be because in comedies, it's really loose, lively and they laugh a lot.
Despite all the disgusting, horrible things that happened on-screen, he was surprised to see how light Ridley kept everything on the set.
c.vi) Bringing the sense of cameraderie from the old production
Watching the original Alien, he noticed that the crew had a sense of camaraderie and it seemed as if there was a history between them.
Obviously Ridley was interested in bringing that aspect into Alien Covenant.
The actors didn't find it hard to bond.
They were near enough saying ‘holy shit, here we are!’,
c.vii) Concerns for the rest of the cast
McBride  felt as if they were really on an expedition , as if they ought to have been saying  "oh, I hope this turns out okay for everyone involved. I hope everyone makes it to the end!’”

Making the movie, it was the first one he made where people habitually died because it was a horror movie.
It was very intense with an extreme level of visual effects and gore.
When filming began, he would go to dinners with a big cast or twenty people.
It was as if every week the table got smaller and smaller with less and less people at the table.

The film also featured a Cameo from James Franco, who McBride had worked with before on Pineapple Express, Your Highness and This Is The End.
McBride liked Franco very much and so enjoyed seeing an old friend show up.
He found himself giving Franco a tour of the ship telling him such things as "Yeah, this is where we do this, and this is where this happens".

Franco's cameo presented a character who was the captain who dies very quickly in an accident in his cryotube and they were near enough saying to one another " Man, I hope that this doesn’t mess people up.".
McBride thought about how their characters in the apocalyptic comedy movie called "This Is The End" (released in 2013) would really appreciate what was happening there, and in that way that seemed funny.

McBride  would see how Fassbender was dialed in with his android performance.
He was looking at him and seeing zero emotion, no matter what he said.
McBride  was spooked out a little bit after time. by the way that Fassbender as the android would always be processing.
He would have to look over Fassbender's shoulder because he thought it was crazy to look at someone who wasn't registering anything he was saying with any emotion

Afterwards he would find himself at dinners that he had with his friends and he would get them to guess how he got slaughtered in the movie and afterwards just tell them "You'll just have to see."