"The Treasures of Satan" trail through the 1970s

leading from
"The Treasures of Satan" trail 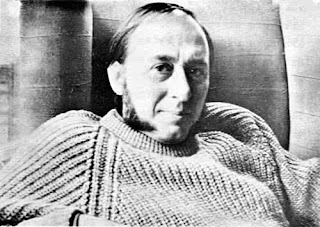 b) Giger picks up the threads

In 1970s, Giger starts to pick up the most significant threads of the paintings that in some way lead from Jean Delville's Treasures of Satan and pull them together for his compositions and others inspired by his work find themselves doing so too.


c) Assuan (1972)
Giger's Assuan reveals itself to be partially inspired by Picasso's Guernica and he would revisit this decade later with Anima Mia. The central figure appears to be inspired by Australian rock art, that seems interesting when thinking about Treasures of Satan's possible connection with the Zigzag Devil petroglyph at the Bradshaw Caves

Chagall's Icarus reveals itself to have a connection with Treasures of Satan and perhaps bizarrely Frazetta's Man Ape, but I have to admit that I don't know what sort of interests Chagall had.


g) Jack Kirby's Lemurian train bomb (1977)
In terms of this series of paintings,  Jack Kirby's Lemurian train bomb (1977) takes notice of  Dali's "Daddy Longlegs of the Evening - Hope!" and considered the commonalities between it and Giger's "Necronom IX" where Giger has taken the phallic nature of the bottom of the violin in Dali's painting and added a hand massaging the fleshy protruberance.

h) Unused Alien logo
Perhaps this was not consciously related to the idea of treasures of Satan, somehow the spirit of that painting got into the design with the long tentacle like wing design and the spiralling tendrils at the bottom left, but it was known to be loosely based on photos of Giger's artwork, and seeing that it was created early in the production, the assumption is that Alien Monster IV was painted afterwards later in 1978 taking the logo into consideration as one of the many source of reference

i) Giger's Alien Monster IV
This painting could be considered one of Giger's Herculean tasks, pulling a multitudes of ideas from paintings together that came before him in the Treasures of Satan family, and perhaps he has recognised the possibility that Gustave Moreau's dragon tails ought to have been significant to Delville when he painted Treasures of Satan, and then Giger merged it with some other more modern ideas. Giger considered himself a surrealist and here was perhaps his most formal contribution to this Treasures of Satan family.