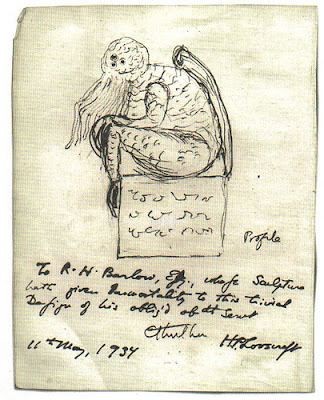 a)  Sketch for an Idol captured from a raid in New Orleans in Call of the Cthulhu
HP Lovecraft wrote Call of the Cthulhu in 1928, and in 1934, he produced a drawing of a sculpture of the great Cthulhu described in the novel for his friend R.H. Barlow to create a sculpture based upon. Perhaps it looked like sort of a strange cuddly toy version of the monster as if it had emerged from the dark side of Winnie-The-Pooh, or perhaps has the proportions of a garden gnome.


The description of the sculpture in the novel
"Inspector Legrasse was scarcely prepared for the sensation which his offering created. One sight of the thing had been enough to throw the assembled men of science into a state of tense excitement, and they lost no time in crowding around him to gaze at the diminutive figure whose utter strangeness and air of genuinely abysmal antiquity hinted so potently at unopened and archaic vistas. No recognised school of sculpture had animated this terrible object, yet centuries and even thousands of years seemed recorded in its dim and greenish surface of unplaceable stone.

The figure, which was finally passed slowly from man to man for close and careful study, was between seven and eight inches in height, and of exquisitely artistic workmanship. It represented a monster of vaguely anthropoid outline, but with an octopus-like head whose face was a mass of feelers, a scaly, rubbery-looking body, prodigious claws on hind and fore feet, and long, narrow wings behind. This thing, which seemed instinct with a fearsome and unnatural malignancy, was of a somewhat bloated corpulence, and squatted evilly on a rectangular block or pedestal covered with undecipherable characters. The tips of the wings touched the back edge of the block, the seat occupied the centre, whilst the long, curved claws of the doubled-up, crouching hind legs gripped the front edge and extended a quarter of the way down toward the bottom of the pedestal. The cephalopod head was bent forward, so that the ends of the facial feelers brushed the backs of huge fore paws which clasped the croucher’s elevated knees. The aspect of the whole was abnormally life-like, and the more subtly fearful because its source was so totally unknown. Its vast, awesome, and incalculable age was unmistakable; yet not one link did it shew with any known type of art belonging to civilisation’s youth—or indeed to any other time. Totally separate and apart, its very material was a mystery; for the soapy, greenish-black stone with its golden or iridescent flecks and striations resembled nothing familiar to geology or mineralogy. The characters along the base were equally baffling; and no member present, despite a representation of half the world’s expert learning in this field, could form the least notion of even their remotest linguistic kinship. They, like the subject and material, belonged to something horribly remote and distinct from mankind as we know it; something frightfully suggestive of old and unhallowed cycles of life in which our world and our conceptions have no part." ( Call Of The Cthulhu, Chapter 2, "II. The Tale of Inspector Legrasse.")

b) Connecting with Treasures of Satan
However, connecting with the idea that Lovecraft used the Sokar Funerary Barque as a starting point for the Elder Things / Old Ones, it begins to look as if he was familiar with the Jean Delville's 1894 painting "Treasures of Satan" with its Satanic figure with tentacle like wings beneath the surface of the ocean.

What looks like a cloth wrapped around the Satan's arm would thus become Cthulhu's head and the way it flows down in front of the sideways facing Satan becomes its tentacles.

Its tentacle on the side nearer to the front of the image curves down under his rear and the rounded shape as it goes around the Satan's torso looks as if it dictates the basic form of the plump body of the Cthulhu.

Where Satan's hand is, connects with a nameless hooked shape at the bottom of the cloth like shape, and Lovecraft transforms into a hand hooked like claws, and the tentacle like nature of the Satan's wings dictates the narrow wings of the Cthulhu.

The next thing perhaps is to wonder what a drawing of the Cthulhu character itself would have revealed rather than a drawing of a sculpture.


c) Echoes of Celebes
The turnip shaped body and the tubular shaped nature of the wings might bring one to think about the barrel shaped oddity of Max Ernst's Celebes. The head becomes placed at the very top of the Celebes structure where there's a rim with coloured abstract structures and half an eye.

Lovecraft's short story Celephais was written in 1920 and then first published in the May 1922, a story about a city in the dream kingdom, and Celebes was painted in 1921, named after an Indonesian island east of Borneo, and it would later be renamed Sulawesi.

Perhaps Lovecraft might have come to know about the painting because of the oddity of the composition and the similarity of the name, as if it were a coincidence.