"Prometheus: Traces of "Tintin and the Shooting Star"

leading from
Prometheus: Development by way of Tintin
and
Hergé

a) "Tintin and the Shooting Star" featured a story where the director of an observatory who is an elderly man organises a trip to find a meteor that has landed in the sea.

b) An elderly mad man who has been bothering Tintin earlier in the story with lunatic prophecies for the end of the world, turns up aboard the ship, hiding in the crows nest, and has to be taken off the ship by men in white coats from the local asylum. 
d) Tintin reaching the meteor, has his lunch, and throws his apple core away, and there was a maggot in the apple.


e) He spends the night there and discovers that meteor has properties of a growth accelerant, the apple core turns into a huge tree, and the maggot turns into a very large flying insect that starts to bother the dog Milou/Snowy 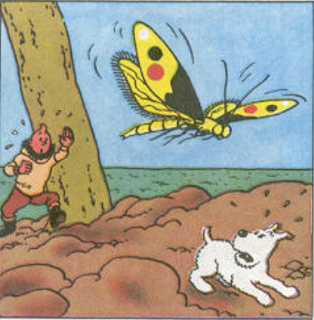 f) Also a spider gets onto the meteor via Tintin's lunchbox and has turned into a giant spider that pursues Tintin, perhaps to make a meal of him, but gets crushed by a giant falling apple.

g) In Prometheus, the black stuff transforms worm like creatures in the ground of the ampule room into large ferocious snake like creatures that kills Millburn, and sprays its acid blood all over Fifield's helmet destroying it.