Traces of "The Adventures of Tintin:
Red Rackham's Treasure" in Prometheus?

Leading from
Prometheus: Development by way of Tintin


a) More revelations
Here I am still presenting both Elizabeth Shaw as a female Tintin, while David the android has something near enough his hairstyle, and so Captain Haddock becomes Captain Janek. Now I am finding some evidence about Millburn and Fifield somehow representing the Thompson Twins.

Over the previous months, I had been looking at Herge's Tintin story, Red Rackham's Treasure, the adventurers are looking for the treasure of the pirate known as Red Rackham, thinking about how some of the images could be translated into elements of the Alien and Prometheus story with its shipwreck and the globe that pops open to reveal treasure inside, and indeed there were the bottles of rum discovered presented in their dozens together, echoing something from Prometheus.

On 17 March 2017, online I had briefly talked about the connections that I was making between Prometheus and Tintin to David Spada of Monsterlegacy.net, telling him "So they said, lets make Shaw a bit like Herge's Tintin and they gave David the android the Tintin-esque hairstyle and Captain Haddock who captains the Sirius might as well become Captain Janek of the Prometheus."

Curiously David added "and the deacon is the unicorn?"

My reply though was "I haven't worked that one out yet"

Back in 2011, The Adventures of Tintin: The Secret of the Unicorn film had been released which was slightly different from the books, it was generally an amalgam of about three of the books. I had not actually read the books thoroughly at the time, but knew that the Unicorn was a ship that had sunk and was a shipwreck on the ocean floor.

I wondered how the Deacon might tie in with the shipwreck, but then it might just have been a connection with the idea of a unicorn through the film's title.

A copy of the book sat on my book shelf replacing the one that should have been there.

Where had the other one gone. By the 8th of April 2017, I took a look at the book again from the Tintin book stand at Foyles in Charring Cross Road and began to make much more solid connections.

I had not really thought of the Deacon as a Unicorn, Getting back to David Spada back on 9th of April 2017, I told him of my findings and he said "I said the deacon is the unicorn because the unicorn has a horn and the deacon has a pointy back end of the head. Like a horn"


Which of course I thought was fair enough because the connection spelt out there seemed as solid as the other speculations that I was having about the connections between the two films, perhaps even more so, and indeed the book seemed to confirm it. 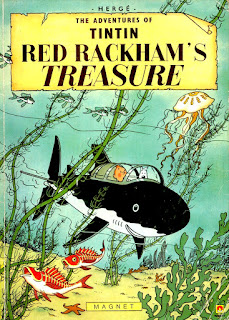 My assumption is that in Prometheus, Millburn and Fifield pair up become representatives of the idea Thompson Twins, pairing up while Fifield appears to be to be the quarrelsome one of the pair. When writing the Prometheus script, it's oddly decided that doing something with tobacco would be interesting, and Fifield appears to be smoking tobacco in his helmet as if that were something different,  the joke is that it's confined to his helmet, although it might be thought that perhaps he was smoking something a bit stronger than that looking at the way they've become lost in the Pyramid building.

d) Bodily remains and head effigy becomes the discovery of the dead engineer and head room
They discover the island, find human bones on the ground perhaps eaten by enemies after a fight and then a statue of the head of Sir Francis Haddock who appeared to have made an impression on the natives.

In Prometheus, the beheaded body of an engineer is discovered at the entrance to the ampule room where they would find the giant head. 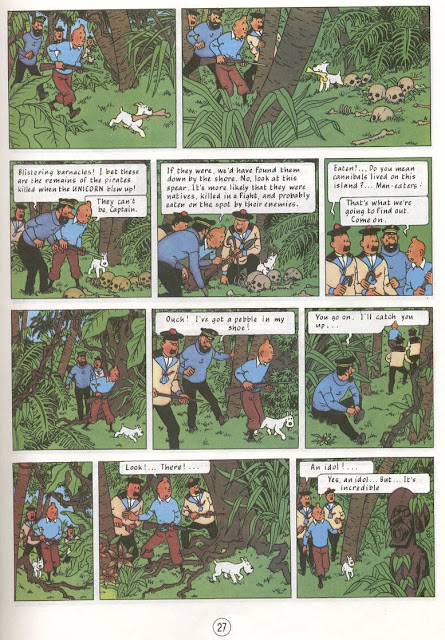 e) Fear leads to members of the party wanting to return to the ship
The sounds of parrots talking makes the Thompson Twins want to head back to the ship.

Fifield the geologist and Millburn the biologist freaked by the discovery of the body of the engineer  decide to head back to ship.

However, rather than just being a head by itself,  the sculpture of Sir Francis Haddock, an ancestor of Captain Haddock, appears to be part of a mostly full body sculpture. 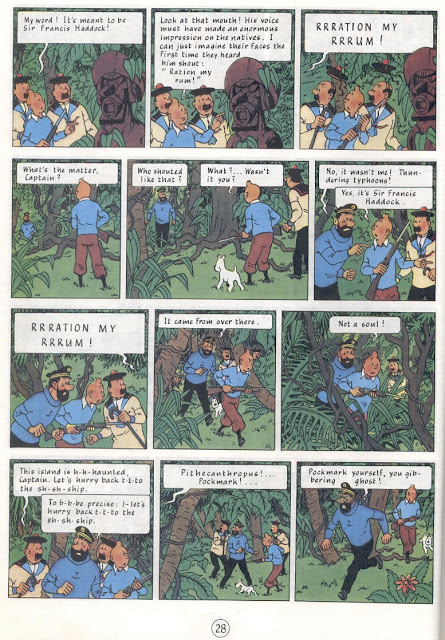 Soon they discover the wreckage of the Unicorn ship beneath the sea.

It might set off thoughts about the alien derelict ship that has its cargo of spores, and these become ampules to be found in the ampule room of the Engineers building that's known as the pyramid. Captain Haddock discovers dozens of bottles of 250 year old rum in the wreck of the unicorn.

It's as if these become ampules full of black stuff in Prometheus.

Perhaps from there comes a connection that the contents of the ampules can be consumed in drink. 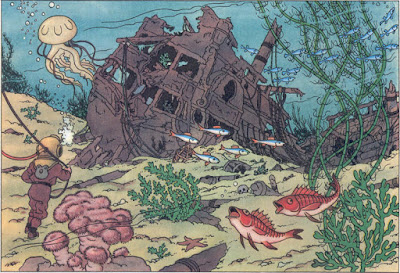 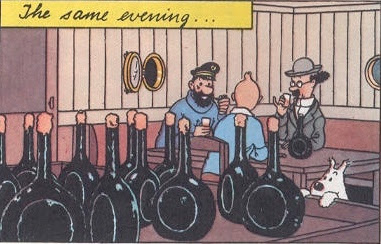 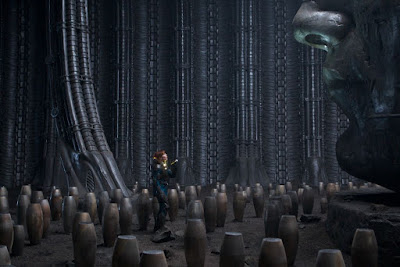 g)  Red Rackman's Treasure becomes the birthing of the blue deacon
At the end of the story, they discover Red Rackham's treasure, the globe opens up at the tops reveals a lid that springs off like a jack in the box.

Perhaps the fact that the top opens up like this is reminiscent of Dan O'Bannon's sketch of the alien spore opening up with a lid for Giger.

This scene then transforms into the birth of the Deacon from the Engineer's body.

Before I  pointed out that the blue colour of the Deacon appears to have linked it with the lyrics of Deacon Blues where the other team name of note was the Crimson Tide (See: Prometheus: "Deacon Blues" and the blue Deacon) 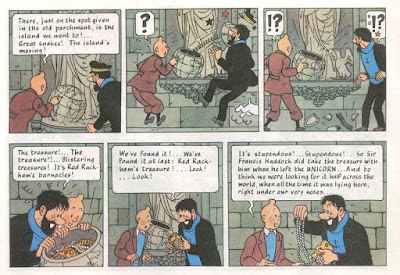 g) The Deacon as the Unicorn
The carved unicorn from the bow of the Unicorn is presented in the museum and perhaps one can look at the idea of the pointed head of the Deacon being like the horn of a unicorn and this is from the last page of the story. 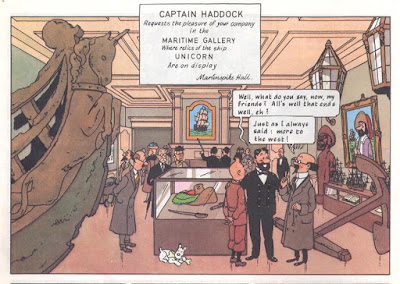 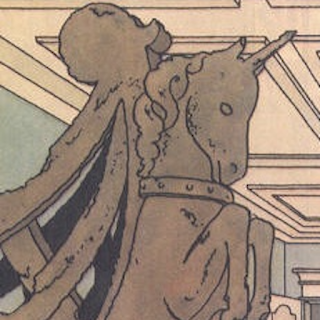