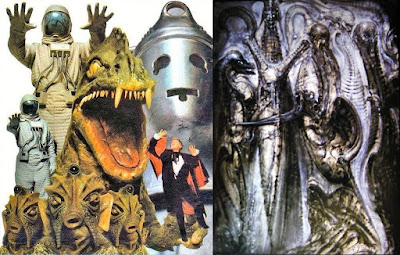 a) 11th May 2017, looking through Radio Times Collector's Group on Facebook, I discover a Doctor Who photograph collage from the 7th May 1970 issue of The Radio Times, and then in my usual way I suddenly realise that Giger would have somehow seen and used as reference for a painting.


b ) It might appear that he would have had some sort of interest in Doctor Who and while he was working on Alien in England, someone else must have been showing Giger his Radio Times pages cutouts, and so Giger would work on the painting called Lovecraft's Visit that year

c) Generally the Cyberman's eyeholes become heads, but then the right left could become the point where the dinosaur's eye is visible, and so Giger uses this dinosaur's eye instead when constructing his image, and so the Cyberman becomes squashed into the right of the image with the vanishing sides of the Doctor and his cape.

e) The cheekbone of the dinosaur becomes a part of the V shape, and is reflected the other side of the astronaut's body.

f) The inside of the dinosaur's lower jaw becomes abstracted as an oyster shell like form. The outline of the right of its mouth and upper arm are kept in the final painting.

i) Meanwhile body of the large astronaut on the left remains where it is but becomes transformed into a missile shape with the lower part becoming a point, in the manner of the way the astronaut in the photo's body vanishes between the small astronaut image the giant dinosaur.